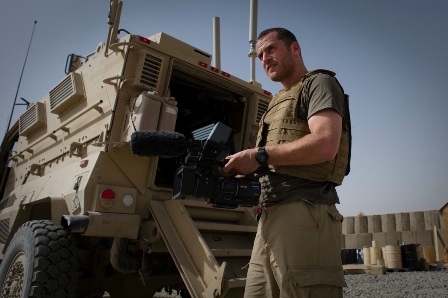 HOLLYWOOD—In February 2010, U.S. Marines launched “Afghanistan: Operation Moshtarak,” the biggest operation since the start of the Afghanistan war. The main target was the Taliban stronghold of Marjah, a town in Helmand province. Journalist Ben Anderson, who spent two months with the American forces, offers an extraordinarily intimate look at the brutal realities of modern-day warfare in the harrowing documentary “The Battle For Marjah,” which debuted exclusively on HBO, marking the first anniversary of this historic battle.

The United States’ largest offensive in the war to date, Afghanistan: Operation Moshtarak, was the first attack launched after the administration announced plans to send 30,000 troops to Afghanistan, serving as a key test of the U.S. counter-insurgency strategy against the Taliban. The campaign had four distinct phases: clear Marjah of Taliban, hold all ground seized, build infrastructure and governance, and transfer control to Afghan security forces. In addition to chronicling the operation, this documentary asks whether the policy is a successful prototype for winning this kind of war.

Ben Anderson spent two months embedded with Bravo Company, the first Marines dropped into the center of Marjah, where they encountered a maze of improvised explosive devices (IEDs), bunkers, trenches and ambushes set by well-trained Taliban fighters. The new rules of engagement, dubbed “courageous restraint” by Gen. Stanley McChrystal, meant they could not fire until fired upon and had great difficulty getting air strikes approved. While these rules were intended to limit civilian causalities, they put the Marines in highly treacherous situations.

Bravo Company’s leader, Capt. Ryan Sparks, is a mentor and friend to many of the young Marines, often making split-second decisions when lives are in danger. He acknowledges the challenges when he addresses his men, saying, “I guarantee you we will lose Marines. I guarantee you we will. Don’t let emotions control you. There’s 80,000 civilians in this city; there’s maybe a thousand enemy. So when I go home, I don’t want to feel ashamed because I’m having problems sleeping at night, because I’m not sure that I did the right thing. What happens over the next five days will be a cornerstone of your memory for the rest of your life.”

Anderson joined the Marines on the front lines of combat and in makeshift sleeping quarters, where he caught glimpses of their personal lives. One Marine confesses how much he misses “his five-month-old son,” having spent only two months with him before leaving for battle.

This film also looks at the relationship between the Marines and the Afghan people. As Sparks explains, the key to success is “to get the people on your side, and let them understand that you’re here for them,” not an easy task when the locals lose friends and loved ones by following the Marines’ orders. For example, the documentary shows one man receiving a condolence payment when members of his family are killed by a stray rocket after being told to stay inside for shelter.

The Marines’ mission is complicated by their Afghan partners ”“ the army, police and government. The government is nowhere to be seen, the police are feared by the locals and the army soldiers (a few accompany the Marines into battle) are a liability. In addition, the members of the Afghan army assigned to the area are from the north and speak a different language. Many come from different ethnic groups which are distinct from the residents of Marjah.

Although they achieve their initial mission, when Anderson returns four months later, the Marines have lost 20 percent of their fighting force to casualties, and battle daily to maintain their shrinking zone of control. Meanwhile, the local economy is still in shambles and the future of the war is in question. Still, as one Marine remarks, “Marines fight battles, they don’t fight wars.”

Ben Anderson is a multi-award winning UK journalist and TV presenter whose recent works include “Young, British and Angry,” as well as “Taking on the Taliban,” a documentary for BBC Panorama. Anderson writes on Afghanistan for The Times of London and regularly contributes to GQ, The Guardian, Independent on Sunday and BBC World Service.

Director Anthony Wonke is a British documentary filmmaker who won a 2008 BAFTA for the BBC documentary series “The Tower: A Tale of Two Cities.”

Chad DiMera Embraces His Dark Side On “Days!”

“The Hunt” Is Polarizing Cinema