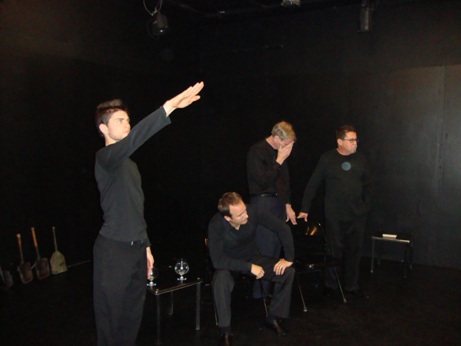 WHAT: “The Berlin Dig.” World Premiere engagement of a new play.

WHO:  Written, directed and produced by John Stuercke.

The play is about a man named Dieter, who is a historical novelist in his 60s living in Berlin. He is being consoled by his friends and contemporaries, Peter and Rolf, after his mother’s funeral. Peter and Rolf were the children of Nazis. They look up to Dieter, who was the son of an anti-Nazi activist, or so he believes. Going through his mother’s papers, he discovers that he was adopted, and that his true father was a Nazi storm trooper. He learns this shortly before he is to meet an American cousin, Robert, face-to-face for the first time; Dieter is covered with shame. Can Dieter be honest about his origins?

Also, within Dieter’s circle is his friend, Ali, a Turkish restaurateur who is in denial concerning Turkish participation in the Armenian Genocide of 1915. Confronted with the facts of carnage and evil of incomprehensible magnitude, how does man respond?

Archeology is a metaphor used at various points in the new play “The Berlin Dig,” as men, most especially Dieter, are called upon to dig deep within themselves to discover the truths of their individual histories.

Stuercke was born and raised in a suburb of Chicago. He is a graduate of the University of Colorado and Los Angeles Film School, where he majored in Directing. Stuercke has written 19 screenplays, two novels, a musical, and two plays, and has directed two short films.

He tells Canyon News, “”˜The Berlin Dig’ was written in three weeks as a direct response to the resurrection of Fundamentalism in America.”