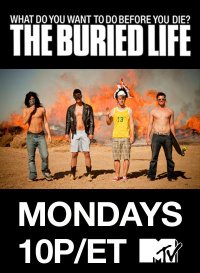 HOLLYWOOD —Nowadays many of the things seen on television are pure entertainment, but every so often you come across that one show that opens your eyes to life.  MTV’s “The Buried Life” is a reality show with heart.  The show revolves around four everyday guys, Duncan, Dave, Jonnie and Ben who all compiled a list of 100 things they want to do before they die and they set out to complete that list as they travel across the nation.  What separates “The Buried Life” from a typical reality show about people chasing their dreams is that for everything they complete on their list, the guys set-out to help everyday people accomplish something they’ve always wanted to do.  These guys genuinely are on a mission to help others accomplish things that may seem impossible and reach their fullest potential; to live life without regrets and give it your all.

Recently an episode that caught my eye was when the guys decided they wanted to compete in a krumping competition.  For those who aren’t familiar with “krumping” it’s a dance craze that started on the West coast and has exploded across the region.  The guys had minimal exposure to the dance style known as krumping.  So to get acquainted, they talked to people on the street, even asked for lessons, and along the way they were able to get lessons from the man who started the craze.  After grueling days of work, the guys competed and did they ever deliver.  In the process of completing one of their dreams, the guys helped a former gang member (Trayvon) get one of his rap songs on the radio.  It’s a touching moment for Trayvon who wanted to show his grandmother he was capable of doing better.

In other episodes of the series, the guys helped a young girl (Elizabeth) accomplish her fear of heights by riding a roller coaster that she had feared.  They helped a young woman named Queen visit her mother’s grave after she lost her in Hurricane Katrina, by raising enough money to send her to Denver.  The episode was extremely touching and powerful; these guys really provided this woman with the support she needed in her time of grief.

While many of the things on their list seem attainable a few aren’t as easy as they thought.  Perhaps the most difficult was their goal to play basketball with President Obama.  My initial reaction told me “It’ll never happen.”  He’s just too busy of a guy.  While in D.C. they spoke to people on the street, U.S. Senators, got on the radio station and even had a meeting with the Secretary of Transportation in an effort to reach President Obama.  In the end, this was a dream that wasn’t attainable at the moment, and I say that because I truly believe in the near future these guys will get the opportunity to play ball with President Obama.

Ben took on the impossible task of getting in contact with actress Megan Fox at the premiere of “Transformers: Revenge of the Fallen,” where he actually spoke to the actress (the girl of his dreams).  That was a stunt that seemed almost impossible; crashing a big Hollywood premiere and actually speaking to Megan Fox, really?  In this week’s episode the guys attempted to cross off a difficult accomplishment on their list —tell a joke on a late night talk show.  After the guys were turned down by Letterman, Leno and Kimmel they turned to Conan O’Brien.  They impersonated a mail carrier (which is a felony), dressed as a security guard and painters to hang a banner over a building, they even resorted to flying a banner ad in the air.  These guys are persistent, and some of their antics are risky to say the least, in the end Conan said no as well, but they did tell a joke on a late night Spanish talk show, so it counts.

The show beyond anything is inspirational; I’m even considering compiling a list of 100 things I’ve always wanted to do before dying.  Actually having something tangible stops you from thinking about doing things and taking action to make them happen.  In a weird way, while watching the show you’re forced to confront any fears that you may have in life and you’re taught the importance of helping others; do it not only because it’s the right thing to do, but because it’s something we all should do.  As I tell many people, the power of seeing someone accomplish something with your help is gratifying and fulfilling.  “The Buried Life” is a reality series that really depicts reality as it is without sugarcoating things.  As a viewer you don’t feel things are scripted or exaggerated to catch the viewer’s attention. It’s eye opening and beyond anything else motivational.  Catch “The Buried Life” on Mondays at 10 p.m. on MTV.