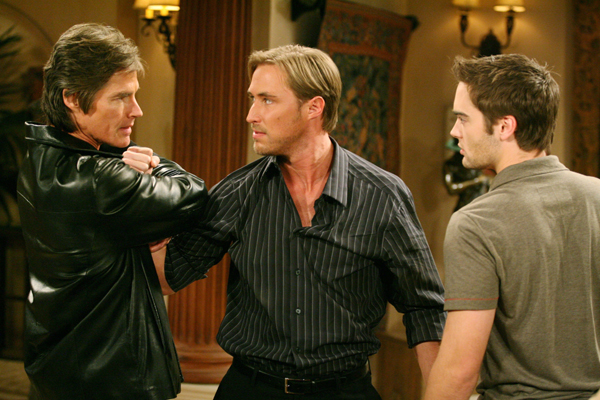 HOLMBY HILLS —The nominees for the Daytime Emmy for Outstanding Drama Series this year include last year’s winner, “The Bold and the Beautiful,” which is helmed by Holmby Hills resident Bradley P. Bell; “The Young and the Restless,” which is produced and written by Maria Arena Bell who lives in Bel Air; “All My Children” and “General Hospital.”

“The Bold and the Beautiful” had an amazing year of storytelling last year. Rick and Thomas’s feud led to an attempt on Rick’s life. Stephanie was reeling from the loss of Eric to yet another Logan woman, this time Donna. Brooke and Ridge had a tumultuous year of love and disaster, Steffy became her grandmother Stephanie’s true namesake, Bill Spencer made a major play for Forrester Creations and for a short time took over the Forrester family company and then Bill fell in love with Brooke and Donna’s baby sister Katie only to flirt and almost have an affair with Ridge’s daughter Steffy. “B&B” had a magnificent year filled with superb writing, excellent acting and great entertainment for over 35 million viewers.

However, it was the very emotional storyline in November led by Betty White, Susan Flannery and supported by Alley Mills and Hunter Tylo, as White, who portrayed Ann Douglas arrived in L.A. from Chicago with one final wish for her daughters to follow. Ann wanted to die on the beach overlooking the Pacific Ocean and not in a hospital without dignity. That led to Stephanie and Pam to vie for their rightful place in Ann’s life and in her heart, leading Stephanie who had disowned her mother for decades to ultimately become her mother’s advocate at the time of her death. With pure brute force by Stephanie, as only Susan Flannery is capable of playing, the hospital was forced to release the dying matriarch who ultimately succumbed to pancreatic cancer and it was the best storyline of any soap in 2009.

Betty White played the role with astounding discipline. Susan Flannery as Queen Stephanie, Alley Mills as Pam and the beautiful Hunter Tylo as Taylor all grieved with Stephanie taking it harder than anyone could imagine when her mother finally went on into the sunset of the heavens. Bradley P. Bell wrote this storyline of marathon emotions with the knowledge and grace of any of Hollywood’s most brilliant writers and producers of the 1940s major studios.

“Y&R” had an amazing year as well. From Doug Davidson and Tracey Bregman, to Joshua Morrow and Michelle Stafford. Paul, Lauren, Nick and Phyllis were front and center for the emotional ride “Y&R” viewers love to take on a daily basis. If by chance “B&B” does not win, “Y&R” is the only one that belongs on the winner’s list. However, let’s hope Brad and “B&B” pull it off again this year. The show took home the gold last year for Storm Logan’s suicide, now it’s Brad’s turn yet again for the death of Ann Douglas, and for showing viewers long before “Saturday Night Live” and TV Land’s upcoming sitcom starring White, that she still has it! She’s still one of the best actresses in Hollywood. And the Bells still do daytime drama better than anyone else.