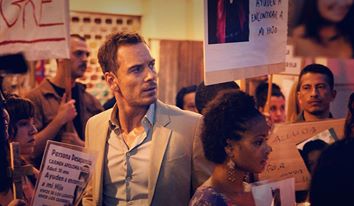 HOLLYWOOD—It appears the month of October has seen a variety of genres hitting the multiplex.  This week we have an intense thriller and a raunchy comedy for moviegoers to choose from.  If it’s comedy that you are looking for, than “Jackass Presents: Bad Grandpa” might be your cup of tea.  The picture is from the team behind the “Jackass” films which saw Johnny Knoxville and the gang engaging in some unbelievable stunts that audiences have to see in order to believe.

Something many will be surprised to learn is the title character Irving Zisman is actually Knoxville in makeup. He is literally unrecognizable as the old geezer who takes his grandson on a road trip, where the duo get into a ton of trouble including crashing funerals, public mutiny and a bit of fun with kiddie rides.  Fans of the series should expect plenty of laughs that will indeed accelerate the raunchy factor.

Making a bit of a transition is the thriller “The Counselor,” which has an A-list cast including Michael Fassbender, Brad Pitt, Javier Bardem, Penelope Cruz and Cameron Diaz. The picture involves Fassbender’s character who is a lawyer who gets in over his head when he gets involved in drug trafficking.

The movie is sure to have plenty of twists and surprises to leave the audience on edge.  By the way, the picture is directed by “Alien” alum Ridley Scott, so you know the picture is going to be good. “The Counselor” had massive buzz a few weeks back, but the buzz for the picture has died down a bit which forces me to wonder if it’s the quality thriller that so many expect. This is the first time that I can say in a long time, what no “Saw” or “Paranormal Activity” this year.

Hey Hollywood, what’s going on? It is Halloween, let’s get back to making the month of Halloween a spook fest at the multiplex as it should be.