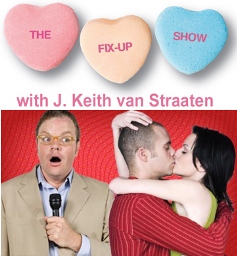 HOLLYWOOD—It’s “I’ve Got A Secret” meets “Love Connection” – live on the Los Angeles stage. Unlike other dating shows over the past 30 years, “The Fix-Up Show” promises civility, with no humiliation, objectifying, drunken seduction or having to eat bugs to prove one’s affection. It’s a dating show where the participants have an actual chance of finding a good date. It’s real, spontaneous and fun, the kind of show you could bring your mom to or fix her up on. Old or young, gay or straight, all are given a chance to find love on “The Fix-Up Show.”

WHO: Host/Producer J. Keith van Straaten last appeared on the LA stage in “What’s My Line? – Live on Stage,” with celebrity guests including Larry King, Amy Brenneman, Drew Carey, and Shirley Jones. He hosted Comedy Central’s TV game show “Beat The Geeks” and is often seen commenting on crazy TV clips on E! Entertainment Television. His essays on dating and Los Angeles have appeared in The Jewish Journal, Tango, and Backstage. And he’s single! More at www.jkeith.net.

WHAT: In this new weekly panel/matchmaking comedy show, host J. Keith van Straaten (“Beat The Geeks,” “What’s My Line? – Live On Stage”) welcomes celebrity guests and real single Angelenos looking for love. Two strangers will be fixed up on a date, live on stage! Fresh from its hit run in New York City, where Celebrity guests included Dick Cavett, Jeff Garlin, Eve Plumb, and Aasif Mandvi, guests for this run will be announced shortly. Updated info available at www.thefixupshow.com.

INFO: THE FIX-UP SHOW brings together a panel of three people-two who know an eligible single well, and one celebrity who has never met the person-and has them interrogate potential suitors in an effort to make a match. The matched pair wins a meal at a local restaurant and goes on a real date! How did our panel do? Find out next week!