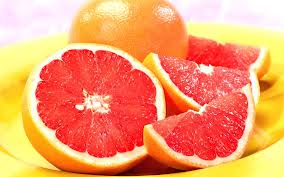 UNITED STATES—I remember as a kid, I didn’t always have cereal or bacon for breakfast; sometimes I was treated to the wonders of a grapefruit. I know what you’re thinking, “Did you eat it plain?” No. The fruit was cut in half and the segments were pulled out and sprinkled with a bit of sugar.  Why is it that the grapefruit has become a treat nowadays? Well, because it’s a bit more tolerable than the lime or the lemon in my opinion.

While grapefruits are tart to say the least, they are not completely sour compared to their counterparts.  I’d say it’s the mix of an orange and lemon with a pinkish orange flesh. Sometimes it can be yellow depending on the type of grapefruit that you buy. Yes, there are many varieties, white, ruby red and pink. Did you know the grapefruit was once known as the ‘forbidden fruit?’

This fruit is known to have a reaction with many drugs that may be absorbed within the body. The juice from a grapefruit known as, furanocoumarins, minimizes the metabolism of certain drugs absorbed in the body. Of course with many fruits and veggies, the grapefruit is also loaded with Vitamin C and lycopene, which is believed to have an impact on reducing the risk of certain cancers. For those worried about foods with a high glycemic index, worry no more, as the grapefruit has a low GI which has been know to help the body burn fat quicker. There is belief that consumption of the fruit can help with the aging process as it contains polyamine and spermidine.

While the grapefruit is not the sweetest treat to use for making a dessert, it is quite the compliment for a unique salad.  Peel the grapefruit and remove all of the white flesh and add the segments to a salad that will provide a burst of color, as well as a tart, but a sweet surprise for the palate.