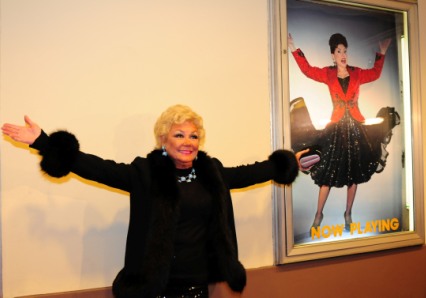 HOLLYWOOD—The Great White Way seems to be buzzing lately with rumors about potential recreations of iconic characters that include that of Streisand mounting Merman’s “Gypsy,” LuPone channeling Channing’s “Dolly” and the as yet to be announced contender for Lansbury’s “Mame.” While others are talking the talk about these legendary characters, Rita McKenzie is walking the walk as her highly promoted Pre-Broadway Engagement of “Ethel Merman’s Broadway” opened last weekend in Los Angeles at the historic El Portal Theatre.

However, the show is not new to the theatre boards, as it has already been dubbed the longest running one-woman show in theatrical history alongside its counterpart, Hal Holbrook’s longest running one-man show, “Mark Twain Tonight.” The producers report that since the show’s last Los Angeles engagement in 2005, it has been retooled, updated and quite literally refashioned with five additional costume changes by Eric Winterling, who created the costumes for “Wicked,” adding additional songs and a new cast member “Whoopie Goldberg, the poodle.”

Ethel Merman was the reigning royalty of the Broadway stage for more than four decades. She defined an era with characters, stories and signature songs that would remain firmly embedded in American culture for generations to come. Too much praise cannot be lavished on McKenzie, who brings an extremely realistic and well-researched persona of the world famous brassy broad to life.

Featured are a 12-piece orchestra under the Musical Director/Arranger David Snyder and other production credits that include: setting by Yael Pardess, lighting by Driscoll Otto, costume design by Eric Winterling, projections designed by David Foster, sound design by Matt Kraus and wig design by Paul Huntley.

Given the historic landmark’s history, The El Portal Theatre is a perfect venue for this production. It opened in 1926, first for vaudeville, then silent movies, and then Academy AwardÂ®-winning films and in 2009, it was chosen by the Smithsonian Institute for their induction ceremonies announcing their first permanent Entertainment History Exhibit.