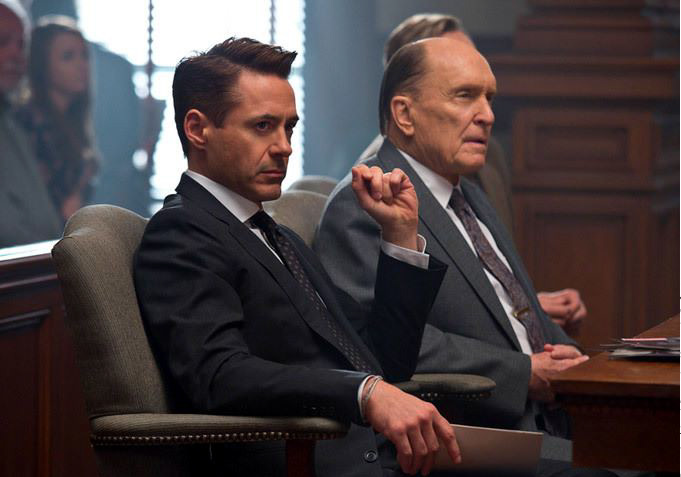 HOLLYWOOD—I’ve seen the trailer for “The Judge” more times than I can count this year. So much to the point, it made me not interested in seeing the movie. While the movie borders the lines of comedy and drama, it produces riveting work from its stars Robert Downey Jr. and Robert Duvall.

Downey and Duvall portray estranged father and son, Hank and Joe Palmer, both titans in the legal arena who find themselves having to confront strained relationship, when Hank’s mother passes away.  The first thing that was quite cliché about the movie is it tackles the dilemma of a highly successful person who returns to his hometown in the midst of tragedy or a crisis. Is it a bit familiar for the audience without a doubt, but what person hasn’t encountered such a transition at some point in their life?

Hank is a hard as nails, defense attorney who is quite good at what he does. He has a penance for using his tongue to get himself out of tough situations, even taking jabs at people he cares about from time to time. Knowing that he has to return to his grassroots brings much dread to our protagonist, but having to come face-to-face with the man he despises, his father is much worse. He has one clear agenda: attend his mother’s funeral and jet out of town, but that all changes when Joe (Duvall) finds himself in the clutches of the law for murder.

Is it odd to see the son doing everything in his power to represent his father, who also happens to be  a well-respected judge? Without a doubt, what’s so striking about this dramedy is the layered level of acting from not justDowney and Duvall, but co-stars Billy Bob Thornton, Vera Farmiga, Dax Shepard and Vincent D’Onofrio. I absolutely loved the interaction betweenDowney, Thornton and Duvall; titans going toe-to-toe with other titans, with dialogue and interaction that movie lovers will adore.

As a viewer, you feel immersed in this small town and encountering the trials and tribulations of a family confronting their past, the present and ultimately the future.  The egos on Joe and Hank are alike anything I’ve seen from a father and son duo in cinema in quite some time. Arrogance is not their only flaw, but stubbornness and forgiveness is quite high up there as well.

The screenplay by writers Nick Schenk and Bill Dubuque is witty, smart and takes the audience on an emotional rollercoaster. I mean if you had a fractured past with a close relative, how far would you be wiling to go to repair it?  “The Judge” puts into perspective for so many of us what we forget time and time again: blood is thicker than water, and the bond of family is unbreakable no matter how hard you try to resist it.

Evacuation Orders In Place For Soledad Fire In Santa Clarita