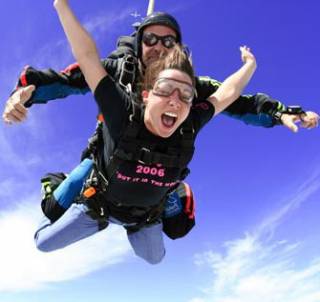 HOLLYWOOD —The eve of the parachute jump, the thing that dramatically struck me was the sudden duel perspective. The words and actions of my everyday life took on an added depth and the contrast between the humdrum ”same ol’ same ol’ and the drumbeat of mortality, ordinarily drowned in a chorus of petty concerns, became acute. Telling my barber, “See you in three weeks,” now assumed an ominous air, for within 16 hours I would be 10,000 feet above California and leaping into the yonder. Me, a Hollywood neurotic par excellence.

The morning of the jump I awoke queasy from holiday overindulgence, feeling downright weak, as if my body rebelled at the challenge it faced—a part of me wanted to feign fever and stay in bed. I got to Camarillo an hour before the appointed 11:30 a.m. check-in. An airport cafe had free canisters of hot coffee at the entrance, a welcome beverage, but this gorgeous California morning, there would have been no way to keep it down.

At the airport gate, I punched the code to go onto the tarmac and walked under the wings of the small parked aircraft. (If I didn’t chicken out, this would be my first time to be aloft in a prop plane as well as parachuting: in my calculus of fear, two dangerous feats counterbalance each other.) Before the pilot came, I regarded the vintage Cessna that would take us away. First order of the day was to sign three pages of waivers printed in microscopic font, so many hands were washed of responsibility I had this urge to consult a lawyer. One of the parties absolved was a Baptist Church.

“Why the Baptist Church?” I asked.

“We’re very religious here,” said one of the trainers, chuckling.

That trainer, one of the two who would accompany the first time jumpers, had a fine gallows sense of humor that vented our unspoken fears. On one side of the premises a wall a world map spanned from floor to ceiling, and all the countries and continents were dotted by red and yellow thumbtacks.

“What do the thumbtacks mean?”

“The red thumbtacks are for the fatalities,” replied Eric, a veteran of 560 jumps, “the yellow ones are for those who were left paraplegic.”

During the day-long prelude to the jump every 10 minutes or so I realized with a spasmodic jerk: look at the dangerous, s cary thing you’re gonna do, kiddo. Then again, there were jumpers who had been scheduled to go up the previous day, when blustery wind kept flights on the ground; they had had an added 24 hours of anxiety. These included two buddies who’d known each other since junior high, and Evan, a French teacher who was jumping on his birthday.

There were a couple from West Hollywood, the guy celebrating his birthday, a good sport indeed. His girlfriend told him ”˜bring a swimsuit’ and never let on that they were going skydiving till they reached the airport and she sprang the birthday surprise. He didn’t panic, but you could see he was uneasy.

Everyone came in scared and kind of glum, like the last guy from Hollywood—another birthday boy (hey, what’s with this death wish on your birthday?). “To be honest, I’m feeling hung over from last night,” he said, looking ill. And finally: “I just want to get this over with.” We waited with the apprehension of somebody awaiting the test results for a dreaded disease. After the jumps everyone would come back happy, elated and stoked. The test results had been negative.

Evan’s and my turn came up. We put on our halters and posed for pictures in front of the Cessna 182, and then we piled into the back of the plane, which had just enough space behind the pilot to fit two jumpers and two trainers. There was a lot of dissonance in my head from the training: I got nervous about remembering it all, when to arc my body, when  to lift my legs back and dig my heels into the trainer’s butt, when to hold out my toes skyward before sliding in for the landing.

Again waiting to take off on the runway, waiting and not believing this is happening. “You’re awful quiet,” Eric the trainer said. Perhaps we shared the same trepidation and fear of giving voice to our misgivings. Evan, the French teacher said, “I only speak French,” and we all laughed and the Cessna rolled forward.

Grady Miller can be reached at grady.miller@canyon-news.com