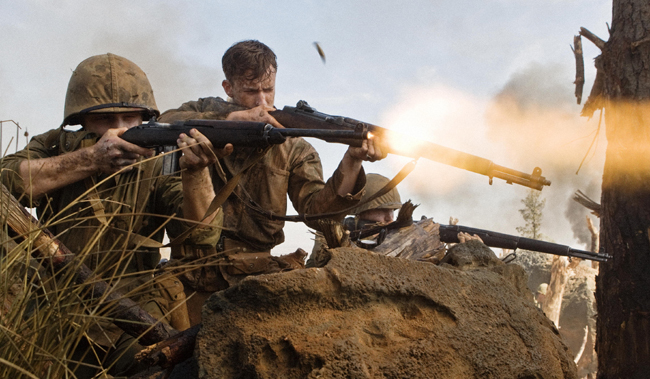 HOLLYWOOD —After having several relatives and neighbors who fought in the Pacific theatre talk about their trials and turmoil during the battle of WWII, I had never been able to envision what it must have been like until this Tom Hanks and Steven Spielberg miniseries “The Pacific” aired on HBO. This is definitely a mind-blowing drama that is so realistic you find yourself needing a nap to revive your energy after the one hour episodes end each week.

On last Sunday night’s episode a lot occurred. After battling across the island of Okinawa for over a month, Sledge (Joe Mazzello) and the rest of the 1stMarine Division were ordered to relieve an Army division that has been in combat against the most strongly defended Japanese position on the island. Joe Mazzello’s performance as Sledge is Emmy-worthy to say the least. The way the actor has aged visually, physically and emotionally in the role can’t have all been the process of makeup. We went from seeing a cocky yank to seeing a strong marine who is now the heart and soul of the platoon and of this series.

The primordial conditions and the moral dilemma posed by the presence of civilians put a tremendous strain on the physical and psychological endurance of Sledge and the other Marines. This is what war is like. Soldiers have to make quick and serious decisions based on winning a war, fighting their inner demons and their conscious while many try to judge decisions these brave young men had to make in order to see the end of the battle.

The viewer gets the feeling as if he or she has grown alongside these brave souls and at the end of the episode, the end of the war came, but the beginning of the rest of their lives are at hand. There is no possible way these men can simply return home and not have the repercussions and emotional stress they’ve endured not affect them in a long term way. However, true to our greatest generation, you see these men filled with love for country, their fellow marines and knowing that they did a necessary evil in order to stop a wicked empire from defeating what we know is the civilized world.

Sunday’s episode was written by the amazingly talented Bruce C. McKenna, whose storytelling has made this miniseries real for those of us too young to remember the time and era. He’s got the vernacular of what 1940s young men would say to each other down to a science. Tim Van Patten directed probably the most spectacular and eye opening episode so far in the series. On Sunday, May 16, the series concludes; however, Spielberg and Hanks should be proud of themselves. This miniseries has changed the way I look at what can only be called, the bravest men who ever lived.