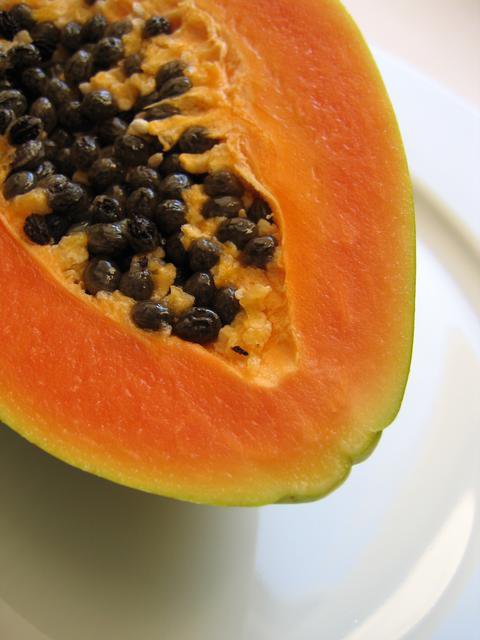 UNITED STATES—When I think of the papaya, I think of a deep-orange colored fruit that tastes best as a juice. Trust me if you haven’t had papaya juice it’s to die for. For those not familiar with the large shaped fruit, it’s a tasty treat amongst other tropical fruits like mango and kiwi. The fruit is oblong shaped and contains a load of seeds in the middle.

Not to scare anyone, but the papaya is vulnerable to fruit flies, who are known to lay their eggs inside the fruit.  So exactly how do you pick a ripe papaya? Its all about texture and color! It should be firm like an avocado, but contain an orange shade to; dark, but not overly dark.

The papaya can be a tricky fruit because there are two types: the sweet version and the not so sweet version.  So how can the average consumer differentiate between the two, the ‘red papaya’ has a sweet taste, whereas the ‘yellow papaya’ can be used to mingle with savory dishes. Important note: yellow papaya is also known as ‘green papaya.’ The green papaya, as it’s commonly known by, contains papain, which is used for meat tenderization. The papain in the fruit has also been used for treating injuries including cuts, rashes, stings and burns. Who knew one fruit could be so versatile to the human body.

If you’re looking for nutritional points, the fruit is loaded with Vitamin A, C and folate. The fruit is also loaded with potassium as well as lycopene, which has been shown to have effects on various cancers including prostate cancer in males. The fruit is typically used in curries, salads and various stews.  It’s a common ingredient in Asian and Thai cuisine, as the fruit is used as an additive to savory dishes. Papayas are loaded with pectin, which is an agent used as a thickening type gel to make various jams and jellies.

Looking for a tasty treat to utilize the fruit, try a classic fruit salad, but utilize other tropical fruits in the mix like kiwi, mangoes, starfruit and coconut for a fresh taste.