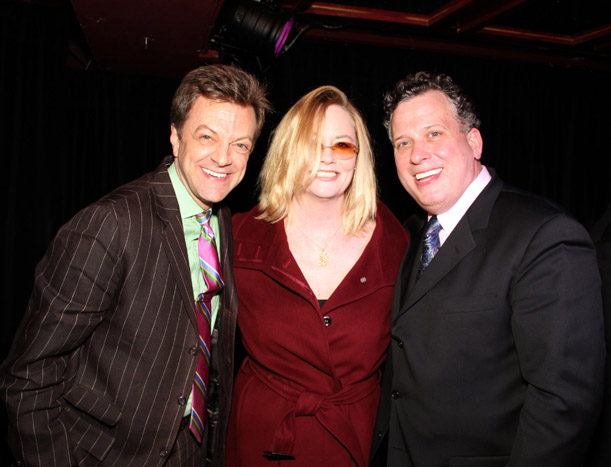 HOLLYWOOD —Jim Caruso’s “Cast Party” is a wildly popular weekly soiree that brings a sprinkling of Broadway glitz and urbane wit to the legendary Birdland in New York City every Monday night for the past seven years. It’s a cool cabaret night out enlivened by a hilariously impromptu variety show. Showbiz superstars hit the stage alongside up-and-comers, serving up jaw-dropping music and general razzle-dazzle. Cast Party is the ultimate spot to mix and mingle with talented show folk and their fans. The buoyant, sharp and charming Caruso guides the entire affair like a bubbly cruise director, musical genius Billy Stritch holds court at the ivories, and the audience is invited to participate in the festivities! It’s the party that would happen if somehow David Letterman and Ed Sullivan threw a hip house party around a grand piano! CastPartyNYC.com

Jim Caruso recently made his Broadway debut alongside Liza Minnelli in the smash hit Liza’s At The Palace! The show was honored with a 2009 Tony Award for Best Special Event and the recording is a Grammy nominee. For his nightclub work, Caruso has won six MAC Awards and two BackStage Magazine Bistro Awards for sold-out shows at Birdland, Arci’s Place, The Oak Room at the Algonquin Hotel, and The Russian Tea Room. His series of weekly podcasts called “Here! on Broadway” was honored with a Summit Award. Please visit Jim-Caruso.com.

Billy Stritch is one of the premier singer-pianists on the New York and national jazz and cabaret scene. His most recent nightclub act “Billy Stritch sings the Mel TormÃ© Songbook” earned rave reviews from the New York music critics. Stritch has appeared in cabaret venues across the nation as well as concert performances at the London Palladium, NHK Hall in Tokyo and Rio de Janeiro’s Municipale Auditorium. In New York, he has performed at Lincoln Center and Carnegie Hall and completed 688 performances as Oscar the rehearsal pianist in the 2001 Broadway revival of 42nd Street. He is the winner of the Nashville Music City News Award, a BMI Song of the Year Award, and four awards from the Manhattan Association of Clubs and Cabarets. As a songwriter and arranger, Reba McEntire and Linda Davis recorded his Grammy Award winning composition “Does He Love You.” He has arranged for many top performers including Liza Minnelli, having written the arrangements for Minnelli On Minnelli, Liza’s Christmas at Town Hall, and was musical supervisor and pianist for the Tony Award-winning, Liza’s At The Palace.

WHAT/WHO: Hot on the heels of the recent Hollywood debut of “Cast Party,” Jim Caruso and Billy Stritch are thrilled to announce their return to The Magic Castle on Wednesday, May 26. Once again, the event will take place at The Inner Circle at the Castle (700 Franklin Avenue, Hollywood). Doors will open at 6 p.m. for singer’s sign up, and the Open Mic-style variety show will start at 8pm.