UNITED STATES−On Thursday, October 8, The Commission on Presidential Debates (CPD) announced that the second presidential debate scheduled for October 15, at the Adrienne Arsht Center for the Performing Arts of Miami-Dade County in Miami, Florida would be virtual, has now been cancelled. 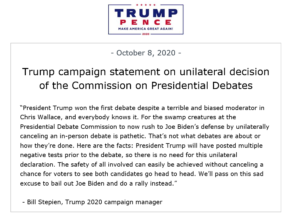 President Trump indicated he did not want to “waste his time on a virtual event.” Democrats cited the president being infected with COVID as their reason to go virtual.  President Trump posted his daily health reports on the White House website

On Thursday, Tucker Carlson had an exclusive interview with President Trump. Carlson suggested he challenge Joe Biden to debate without the CPD. President Trump suggested, “The great Sean Hannity,” could be a moderator. He also suggested Carlson as well.

The CPD has sponsored presidential and vice-presidential debates since 1988. The moderator scheduled for the October 15 debate was C-SPAN and former aide to Joe Biden, Steve Scully.

Scully was reportedly tweeting with a financier referred to as, “The Mooch,” writing, “@Scaramucci, should I respond to Trump?” Anthony Scaramucci, briefly served as The White House Director of Communications. Scaramucci’s tweets have all since been taken down.

Scully indicated that he must have been hacked.  According to reports, the tweet was intended to be private between the two, but went public.

On Friday, October 9, Frank Fahrenkopf, co-chairman of the CPD told Brian Kilmeade on Fox News radio that Scully’s account had been hacked.