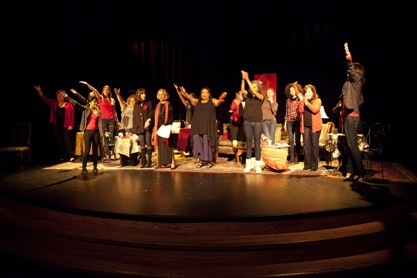 HOLLYWOOD—In February, Eve’s Lime Productions and The Limelight Project brought Los Angeles audiences a very special production of Eve Ensler’s “The Vagina Monologues” at the Barnsdall Gallery Theatre. Under the direction of Ally Zonsius and produced by Sheila J. Hardy, the production moved fluidly from monologue to monologue taking the audience with them through a very entertaining and moving experience.

Patrons laughed in hysterics, squirmed with discomfort and even cringed to mental images offered by Alison Arngrim (“Little House on the Prairie”) with “Because He Liked To Look At It,” Gabby Sanalitro’s rendition of “My Angry Vagina,” Nikki Brown’s performance of “The Woman Who Loved to Make Vaginas Happy” and Kate Linder’s (“The Young and The Restless”) sublime interpretation of “I Was There In The Room.” A highlight of the evening’s production was Tippi Hedren’s amazing recitation of “Myriam” written by Eve Ensler and dedicated to activist and author, Myriam Merlet. Merlet was chief of staff for the Ministry for Gender and the Rights of Women of Haiti. She was the founder of Enfofamn, which collects and promotes women’s stories, while fighting for women’s rights through the media.

V-Day is a global activist movement that generates broader attention for the fight to stop violence against women and girls, including rape, battery, incest, female genital mutilation (FGM) and sex slavery. In 2010, more than 5,400 V-Day events/performances took place around the world. To date, the V-Day movement has raised over $75 million and reached over 300 million people. The Barnsdall Gallery Theatre production beneficiaries include Peace Over Violence and Women & Girls of Haiti.