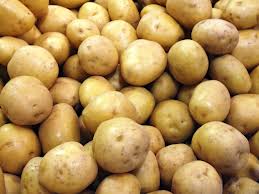 UNITED STATES—There are many varieties of potatoes out there, but if there is one potato that will catch your attention because of its color, than theYukon gold takes the cake.  However, there is much more to this potato than its color that makes it such a delicious treat. The veggie didn’t really hit the market until the 1980s. It received its popular name from Gary Johnston and Charlie Bishop.

Unlike other versions of the potato, Yukon Gold potatoes are unique, not just for its color, but for versatility.  This potato can be cooked by boiling, frying, baking, broiling, roasting and grilling.  The texture of a Yukon Gold is unlike any other; it’s smooth, velvety, and rustic.  It’s the perfect potato to created delicious mashed potatoes; they are great for French fries, as well as in stews. On a health level, potatoes contain a high Glycemic Index, which are not good for the body, as it impacts blood sugar, so keep consumption as little as possible. Not a wise idea to eat potatoes every single day of the week.

Yukon Gold potatoes are packed with vitamin C, carbohydrates and potassium. For those uninspired cooks out there, a Yukon Gold potato can bring an extra flare to some old classics. Instead of using Idaho potatoes, substitute its relative for a divine potato salad.  We’ve all had mashed potatoes, but a Yukon Gold delivers a texture and fluffy taste that beats all other competitors.

Last but not least, when it comes to a baked potato, the Yukon Gold is king! Add some butter, plain yogurt, some turkey bacon (crispy) and some mozzarella cheese. It’s a potato unlike any other, Enjoy!