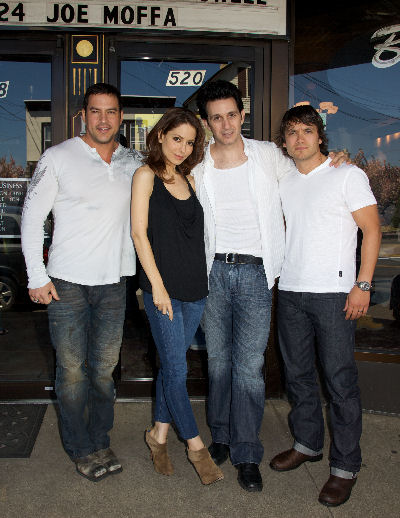 BEVERLY HILLS —This week in Hollywood Betty White was all the rage. The almost 90-year-old star is showing no signs of slowing down. The technical unfriendly Judge Judy joins Facebook, but not the way you think. Elin Woods has had enough of the Tiger cheating scandal, Hollywood mourns a legend, Miley Cyrus has an oops moment and join soap stars to help a good cause.

Betty White’s appearance last weekend on NBC’s “Saturday Night Live” garnered the variety show its biggest ratings in 18 months. On Wednesday, “The Bold and the Beautiful” was again nominated for Outstanding Drama Series, an award it took home last year. Everyone knows that it was most likely Betty White’s November 2009 storyline on the soap that helped bring attention to what an excellent series “B&B” really is. Betty White’s new nickname in this town is White Heat! In 1949 the gritty and dramatic film “White Heat” starring Virginia Mayo and James Cagney was a box office success for Warner Bros Studios. That same year Miss Betty White was also starring in an unforgettable TV series called “Hollywood on Television,” as the Phone Girl. Sixty-one years later, the still vibrant superstar is more popular and sought after than ever before. Hollywood has had an obsession for a century with youth. Miss White proves true talent wins out in a business that can be very tough but rewarding. Miss White says, “I’m 88 and a Â½.”

It was a Facebook petition by fans to get Betty on “SNL” that started it all. Another beautiful star post 40 is now the focus of a new Facebook petition. Famed jurist Judge Judy is the new lady fans want to see on the NBC late night variety series. My friend Beverly Hills resident W. David Lindholm has created a page in honor of Judge Judy, and his goal is to get her to host like fans did for White. David tells Canyon News, “Another Facebook friend and I were talking about Judy’s “Beauty Fades – Dumb is Forever” quote last night and that’s when I got the idea for a SNL page for her.” David is one of the most talented Hollywood historians and also a “SNL” fan, who feels with the exception of Betty White, most of the show’s hosts have been a lot of boring young stars who are not interesting or even funny. “Judge Judy could do cartwheels around them,” concluded Lindholm. To join the Judge Judy Should Host SNL group, go to Facebook | JUDGE JUDY TO HOST SNL

If Miley Cyrus wanted to get fans’ attention, she did just that. In the most recent scandal, 16-year-old Miley is seen in a video lap dancing and grinding on a 44-year-old man in what she hopes will soon go away. The man in the video is Adam Shankman and Miley’s father Billy Ray has been quoted as saying, “It’s what people her age do!” I suppose times have changed since I was a teenager. Perhaps Miley will end up a lot better off than another star who was just as popular and successful at her age. “Different Strokes” star Dana Plato, who died at the age of 36 over a decade ago after a lifetime of drug abuse, was extremely popular as a child star, and has another milestone in her legacy. In a sad footnote to Dana’s tragic story, her 25-year-old son Tyler Lambert committed suicide this week. The young man was a cameraman and amateur songwriter, but has had a difficult time dealing with the death of his mother eleven years earlier.

“True Blood’s” third season debut is getting a lot of buzz. Check out the trailer for the return of HBO’s most popular series, which debuts on Sunday, June 13, on HBO. YouTube – True Blood: Season 3 Trailer #1 (HBO). Yes, look out vampires, shape shifters and mind readers, werewolves arrive in Bon Temps. Happy birthday to the show’s creator Alan Ball.

Join Joshua Morrow (Nick), Kate Linder (Esther), Lesley-Anne Down (Jackie), Katherine Kelly Lang (Brooke), Sarah Brown (Aggie), Heather Tom (Katie), Aaron D. Spears (Justin), Jacqueline MacInnes Wood (Steffy) and Ashley Jones (Bridget) when they step out to support foster care children at the “Hillsides Foster Soles Celebrity Shoe Auction Party” on Tuesday, May 4. The event will be held at Bar Celona in Pasadena, Calif. and will benefit Hillsides, a residential home for foster children. Dr. Drew Pinsky is hosting. Tickets are $25 in advance and $35 at the door. In addition to mixing and mingling with celebrities, the night will kick off an online celebrity shoe auction that will run May 4 through May 20 at clothesoffourback.org/hillsidesfostersoles. Jack Wagner (Nick) and Jennifer Gareis (Donna) are also participating in the online auction. To buy tickets, or receive more information, visit:Hillsides.org. If you can’t be there in person don’t forget to visit the online auction!

“We Build” is a three-day build meant to empower women to make a difference. Successful women in entertainment, science and technology, and other fields will work together on six homes in the city of Pacoima. These women will be working with community youth to encourage them to empower themselves and make a difference. Each day includes tours of the site, building homes, planting a garden to encourage self-sustainability, and keynote speakers. The San Fernando/Santa Clarita Valley Habitat for Humanity is unique in that they build communities, not individual homes. Therefore, participants are helping to better the lives of many in ways beyond simply providing an address. Please help sponsor “The Bold and the Beautiful” team by visiting humanityca.org/events/20/team/70 and making a donation.

Celebrated African American actress and singer Lena Horne died on Sunday at the age of 92. After beginning her career singing in the Harlem Cotton Club, Horne had become an actress in Hollywood and was signed to the largest and most prestigious studio in history, MGM in the 1930s. Ms. Horn was often given supporting roles so that her scenes could be cut out of the films when the pictures played in the south. Her most well known film early in her career was “Cabin in the Sky,” directed by Vincent Minelli. Horne was a huge supporter of civil rights, which caused her to be blacklisted for a period of time in Hollywood. After leaving Hollywood, Ms. Horne focused on her very successful singing career. On Friday Horne was mourned by thousands of fans at a funeral service at the Church of St. Ignatius Loyola in New York. Lena Horne is survived by a daughter and five grandchildren.

Famed victims advocate attorney Gloria Allred and her client actress Charlotte Lewis gave a press conference at 10:30 a.m. on Friday in Los Angeles regarding the director Roman Polanski, who remains under house arrest in Switzerland and is fighting extradition to return the state of California for an assault on a minor over 30 years ago. Ms. Lewis stated during the press conference that Polanski allegedly sexually assaulted her in the early 1980s while she was 16 years old working on the film “Pirates” in Paris. Attorney Allred began her press statement by indicating that they met with the Los Angeles District Attorney’s office regarding alleged conduct by Polanski against Lewis as a minor. Allred said that crimes against a minor have no time limit. Canyon News contacted Charlotte Lewis. Through her attorney Lewis said in part, “I am also a victim of Roman Polanski. He sexually abused me in the worst possible way when I was just 16 years old, four years after he fled the United States to avoid sentencing for his crime. In addition to the fact that both myself and his previous victim were underage I believe that there are other similarities in the crimes that he committed.”

Ms. Allred tells Canyon News, “I hope that Charlotte’s example of courage in coming forward will empower and encourage others who may have been victimized by Mr. Polanski to also come forward and report their experiences to the law enforcement or me. Charlotte and I commend L.A. County District Attorney, Steve Cooley, for pursuing justice in the case of Roman Polanski. I am honored to represent Charlotte, who is very brave and who contacted me for assistance to make sure that what she suffered at the hands of Mr. Polanski would be taken into account in the criminal justice system. I believe that the sentencing judge needs this information to make an informed decision and we look forward to continuing to cooperate with law enforcement in the pursuit of Mr. Polanski, a man who is both a sexual predator and a fugitive from justice.”

Want to have breakfast with four stars of the ABC drama “General Hospital”? Tyler Christopher, Lisa LoCicero, Dominic Zampgrona and Ronnie Marmo are offering “GH” fans a great opportunity to meet with them. This is not an auction, but a door prize. Fans who will be in town for the “General Hospital” fan club weekend in Studio City can buy a ticket to Tyler Christopher and Ronnie Marmo’s 8th Annual Theater Fundraiser (to be held July 25) and become eligible for the grand door prize: a private breakfast (Continental style) with Tyler, Ronnie, Dominic and Lisa LoCicero.

The winner can invite two friends to join in on the fun (they also have to purchase a ticket to Annual Theater Fundraiser). The drawing will be held Saturday, July 24, (possibly sooner) with the breakfast the next morning (7/25) 8-9:30 a.m. in a private room. Have all four of these great actors to yourself. No sharing with a room full of other fans. To purchase your tickets and to learn more about this opportunity go to Tyler Christopher Official website at tylerchristopher.com/.

Have a great week, see you next Sunday! XOXO

Photograph of Tyler, Ronnie, Dominic and Lisa LoCicero is Courtesy: Thomas Montalto at www.montaltophotos.com/ And a special thanks to Sherri Evans