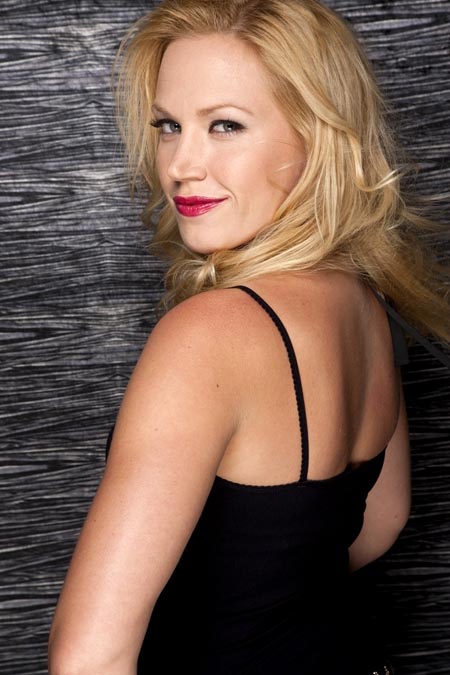 Actress Adrienne Frantz will resume the contract role of Amber Moore on the EmmyÂ® award-winning daytime drama, “The Bold and the Beautiful. Frantz originated the character of Amber, a feisty vixen that went to great lengths to improve her lot in life in order to overcome being labeled trailer park trash, in 1997. The last time viewers saw Amber on “B&B” was in 2005, when she heroically rescued amnesiac, Ridge Forrester (played by original cast member, Ronn Moss), from his kidnapper, Morgan DeWitt (played by Sarah Buxton). She then joined “B&B’s” sister daytime drama, “The Young and the Restless,“ where she portrayed the same character, Amber Moore, from 2006 to 2010. Amber left Genoa City leaving husband Daniel heartbroken.

This time around on “B&B,” Amber” returns to Los Angeles to work as a fashion designer for Jackie M. at the request of Whip Jones (played by EmmyÂ® award winning actor Rick Hearst). Frantz began taping on the showon May 18. Her first air date is scheduled for July 1. Just in time for Fourth of July fireworks.

During her previous “B&B” stint Frantz’s performance as Amber garnered her a Daytime EmmyÂ® Award as Outstanding Younger Actress in 2001, as well as nominations in the same category in 2000 and 2003. In addition, she was nominated in 2000 and 2001 for Outstanding Younger Lead Actress for the Soap Opera Digest Awards. She also won Best Performance by a Young Performer in a Daytime Serial at the 20th Annual Youth in Film Awards, an Australian Boomerang Award in 2002 as Most Popular Couple along with her then co-star Sean Kanan (Deacon Sharpe) as well as the Best Female Vocalist award at the 1997 International Music Awards.

An accomplished vocal performer and songwriter, Frantz released an album entitled “Anomaly,” which was released in 2007 and kicked off an international tour.

Jesse James went on ABC’s “Nightline” to discuss his cheating scandal and upcoming divorce from Oscar-winning actress Sandra Bullock. If Jesse thought it would repair his image, he was wrong. Fans who don’t care about his adulterous affairs may have found him sympathetic, but virtually no one else watching did. He even blamed his dad’s alleged physical abuse for why he cheated on Sandra, but that smacks of not taking responsibility for what he did to the woman he claimed to love and cherish. Though his parents deny the abuse allegations, his sister told the media Jesse is telling the truth. What does this have to do with cheating on your wife with multiple women? If he thought we cared to hear his dirty laundry, he’s absolutely wrong. With so many cases in the nation and around the world of human trafficking of children and serious abuse, it is ridiculous for a man almost 40 to tell America that what happened to him over three decades ago is the reason why he broke his wife’s heart and his own kids’ hearts. Here’s wishing Jesse good luck and hoping he’ll stay off of TV pleading his case for being a serial cheater.

Simon Cowell said goodbye to Fox’s “American Idol last week.” Many of the former contestants and winners from previous seasons came back to commemorate and serenade Cowell, as the show’s most popular host on Wednesday night. Even ousted judge Paula Abdul showed up to poke fun of her friend and even sat on his lap during the show. The crowning moment came when Bret Michaels made an appearance after suffering serious health issues over the past month. Simon’s new series “The X Factor-USA” begins airing on Fox next year. Stars of the “Harry Potter” films spent the last two weeks completing the final film. During the last decade we’ve watched actor Daniel Radcliff, who is now 20 go from a kid to a grown man. “Harry Potter and the Deathly Hallows Part I comes out this year and Park II will be released in 2011.

Whether it’s Sarah Ferguson’s attempt to reacquaint herself with Americans or try to apologize to the British Royal family from over 3000 miles from their western shore, the former Duchess of York taped an appearance of the Oprah Winfrey Show on Friday, which will air on Tuesday in the U.S. Ferguson was grilled by Oprah on her latest financial situation, which caused her to attempt to sell access to her ex-husband Prince Andrew. The sting was caught on tape when a British newspaper known for videotaping such interviews aired worldwide showing an inebriated and desperate woman trying to get $750,000 for access to the man who is fourth in line to the British throne. Perhaps Queen Elizabeth II and Prince Andrew should have known that the alimony settlement in the amount of $21,000 per year would not be enough to keep Fergie in the manner in which she became accustomed to living while married to a royal? Ferguson stated that Prince Andrew and no one else with the Royal family was involved in her efforts.

In another sad footnote to the story of actress Brittany Murphy’s death earlier this year. On Sunday, her mother also found Murphy’s husband, British film writer Monjack dead in the home he shared with Murphy before she died. Monjack’s death is presumed caused by natural causes, said investigators with the L.A. Coroner’s office. This seems to be a lot for Murphy’s mother, Sharon to endure in less than five months. Our prayers are with Sharon who lives in the Hollywood Hills.

Brentwood based band Acidic will kick off its summer concert tour this Memorial Day weekend when the band performs at Six Flags Magic Mountain, 26101 Magic Mountain Parkway in Valencia, Calif. on Sunday, May 30, at 8 p.m. and 9 p.m. The performance will be at the Sierra Stage in Golden Bear Plaza. Admission to the show is included in purchase of admission to park. Tickets can be purchased in advance by visiting sixflags.com/magicmountainor at the gate on the day of the event. The show is open to all ages. Then next weekend ACIDIC performs at The Waterfront, 4211 Admiralty Way in Marina Del Rey, Calif. on Sunday, June 6, at 8:30 p.m. Admission to the show is $15. Tickets can be purchased in advance by calling the box office at 310-448-9550 or at the door on the night of the event.

Take my word for it, “B&B” is heating up for the summer like no other TV show. DJ Tony Okungbowa of “The Ellen Degeneres Show” guest stars on the soap during one of the most exciting storylines ever written for the daytime TV show. Okungbowa shows up on June 1-4 and again on June 7. So will Rapper Daddy Yankee, who appears on those same dates. “The Price is Right” model Manuela Arbelaez airs on June 4 and 7. This sizzling summer storyline kicks off on Friday, June 1.

A high-powered music business manager with a famous Reggatone rapper client, Daddy Yankee as Dempsey (DJ Tony Okungbowa) is a friend and colleague of Oliver Jones (Zack Conroy). Looking for just the right Los Angeles location to shoot a new music video, Dempsey calls upon Oliver for advice. Soon, the stately Beverly Hills Forrester mansion is transformed into an ultra-modern urban dance mecca and Hope’s (Kimberly Matula) high school graduation party begins. With a contemporary twist to the traditional masquerade ball, Hope’s guests, including a friend played by “The Price is Right” model Manuela Arbelaez, quickly become entranced by the hypnotic rhythm of the music. As the summer unfolds, so do the transgressions that occur at the party, which will lead the Forrester and the Logan families into uncharted territory.