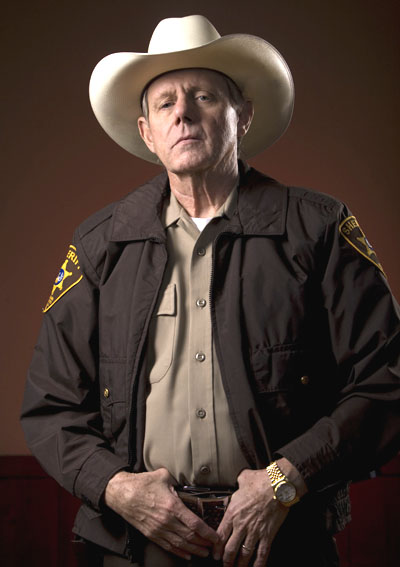 BEVERLY HILLS —This week in Hollywood we caught up with Bon Temps resident Sheriff Bud Dearborne, who is played by prolific actor William Sanderson. Hollywood mourned another legend’s death, and Kevin Costner welcomed another child. There were no headlines about Tiger Woods or Jesse James, but a lot of others.

Prolific and distinguished actor William Sanderson is as excited as the tens of millions of “True Blood” fans known as Truebies about next week’s premiere of season three of the show on HBO. Sunday nights will be a lot more exciting now that summer has arrived and the Bon Temp residents are back for more mayhem and excitement. The town’s Sheriff Bud Dearborne was last seen just recuperating from being under the spell of the evil maenad Maryann, who fans celebrated her demise last season. The handsome actor spoke exclusively with Canyon News this week about the upcoming season. “I am excited, Tommy. It’s a great feeling to be part of a show that so many people are talking about. The DVD sales from our second season are strong; I see people stopping to look at ”˜True Blood’ posters on buses, etc…, and I’m getting lots of e-mails from fans and requests for interviews,” says the star who is “True Blood’s” top lawman.

Sharing with my dear friend Bill how much I love and enjoy Sheriff Dearborne, who I now consider my favorite TV sheriff, the star replied, “Thanks for saying Bud is your favorite sheriff. Yes, you will see Sheriff Dearborne in the new season. Alan and HBO wouldn’t like it if I gave the story away but I can tell you that Bud is out of the trance and is dealing with other issues. You’ll have to watch to find out!” Wait and see? I thought my friendship with Sanderson would get a few “True Blood” secrets out of him. However, the consummate professional respects his boss Alan Ball as much as fans do. On a personal note, I asked what the man who loves to travel with his beautiful wife Sharon will be up to this summer. He replied he’d be watching the series along with the fans and viewers, but concluded, “Tommy, I will be hanging out on the East Coast. I’ll spend time between our house in Pennsylvania visiting family and friends and at an apartment, that I took in New York City for the summer. I’m going to do a lot of walking and reminiscing in the city. I also plan to visit all my favorite spots that I remember from the six years I lived there, and maybe discover some new places.”

“Golden Girl” star Rue McClanahan died on Thursday in a NYC hospital at the age of 76. The star who was married six times won over critics and viewers of her NBC hit series “The Golden Girls” as the sexy and saucy-talking Blanche. Rue has joined her friends Estelle Getty and Bea Arthur in heaven. The last surviving “GG” is acclaimed actress Betty White who is 88 years old. Although I am ecstatic for Betty’s latest resurgence of her career and popularity, I have a peeve with the entertainment media who continue to refer to “Saturday Night Live” as the show that revamped Miss White’s career. Hundreds of thousands of Facebook fans managed to convince “SNL” execs to bring Betty on as the show’s host. The man who should be credited with reviving Betty’s already established career is “B&B” honcho Bradley P. Bell, who chose Betty two years ago for the role of Ann Douglas on his hit series. Brad and his casting guru Emmy-nominated Christy Dooley were the two who decided she was far from washed up, and gave her two of the most exciting years of her career in dramatic acting. Miss White deserves to be given credit for the role that she recently concluded on “The Bold and the Beautiful” in one of the most shocking and well-written and acted stories about “death with dignity.” Something we all care about and respect.

Speaking of “B&B.” Handsome and talented star Patrick Duffy, who portrays Stephen Logan on the soap, will be making TV history and appearing on the Friday, June 25, episode of the Emmy-winning “The Price Is Right” alongside “Y&R” star Peter Bergman and show host Drew Carrey. The episode of “TPIR” will air just two days before the Daytime Emmy awards air live on CBS on Sunday, June 27, from 9-11 p.m., live ET/delayed PT.

“Saved By The Bell” star Mark-Paul Gosselaar and his wife Lisa Ann Russell split earlier this week after 14 years of marriage. The couple met on the set of “Saved” and have four children. No word yet on Gary Coleman’s funeral or memorial services. Though it’s been revealed his wife Shannon Price and he were divorced at the time of his death. Gary had appointed his ex-wife in his medical directive. Shannon agreed last week to turn off life supports for the “Diff’rent Strokes” star, who was 42 years old. Book Soup, bookseller to the great and infamous will be hosting an evening on Friday, June 9 with “Diff’rent Strokes” star Todd Bridges. Bridges will be speaking starting at 2 p.m. Book Soup is located at 8818 Sunset Blvd in West Hollywood.

Rumors are rampant in Tinseltown that songstress Mariah Carey and her handsome actor husband Nick Cannon are expecting a baby. Cannon did not shoot down those rumors when he joked on his radio morning show that he and Mariah already have baby names picked out. Whether it’s true or not, good luck to the gorgeous couple. While Oscar-winner Kevin Costner may be ready for a reality show himself. “Kevin Plus 7” has a ring to it. The handsome actor/director and his wife, Cinday Silva have welcomed another child, named Grace Avery into the world. Costner had three children with his previous wife and a child with a former girlfriend.

Esteemed Nashville journalist Vernell Hackett’s new biography of Carrie Underwood is soon to be released. Carrie has sold more records than any other female Country Music star in history. “Carrie Underwood: A Biography” follows the singer from a small town in Oklahoma to the stages of the most prestigious concert halls in the world. Along the way, fans will read about this girl-next-door’s decision to compete on “American Idol” and her subsequent triumph there, about her first recordings in Nashville and her platinum albums, and about her sold-out concert tours with superstars like Brad Paisley, Kenny Chesney, and Keith Urban. The beautiful singer is well known to those of us involved with the USO and the book is excellent.

Vernell Hackett is a freelance journalist based in Nashville, Tenn., who has written about music and entertainment for 20 years. The book can be purchased by going to amazon.com/Carrie-Underwood-Biography-Greenwood-Biographies/dp/product-description/0313378517.

And the winner is Michael Graziadei (Daniel, “The Young and the Restless”) took home the coveted Best Actor Award at the Honolulu Film Festival for his new film “The Outsider.” Graziadei and other stars of his hit soap are expecting a lot of excitement this summer thanks to super-scribe Maria Arena Bell, who is also executive producer of the number one daytime drama.

Thanks to my friend Rene’ Thurston for starting a Facebook campaign to get me on HBO’s “Big Love” as a guest star. On the heels of my “As The World Turns” debut in April and my upcoming August performance in Henry Jaglom’s summer film “Queen of the Lot,” Rene’ wanted to give me a big surprise. Rene’ is one of the most talented and sought after web mistresses in the nation. I remain very grateful to her for this honor. I would say, I don’t deserve it, and maybe I don’t. However, thank you, Rene. Please join this page and give me a bit of support. Facebook | Support Tommy Lightfoot Garrett to Guest Star on the HBO Series BIG LOVE!

Thanks, have a great weekend! See you next week. XOXO