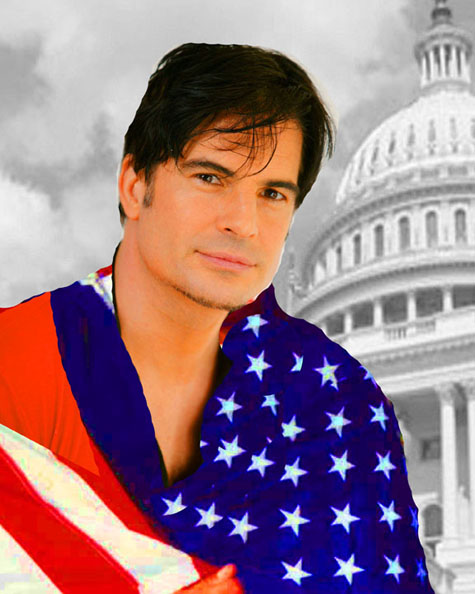 BEVERLY HILLS—This week in Hollywoodland I returned from Vegas where the Daytime Emmys were held, Mel Gibson is in hot water again, “Gone With The Wind” star Olivia de Havilland celebrated a birthday, a “Rebel” star died, Hollywood and the world are in excitement over “Eclipse,” my friend Thom Bierdz makes history again and there is big Tiger Woods news.

West Hollywood author, actor and equal rights activist Thom Bierdz tells Canyon News how happy he is with the latest honors given to his autobiography “Forgiving Troy.” The autobiography just won five International Book awards.  “Tommy, when my dead mother guided me back to forgive my schizophrenic brother in prison, five years after he killed her, I knew this was a story of transcendence that I had to share, and that the message was not partial to any one country- the message is universal. I am so glad people from around the world are experiencing the healing that happened in my book, ‘Forgiving Troy’,” said the author.

Thom has a busy summer ahead. Acting, painting and writing are just the most popular of his talents. Bierdz concludes, “In July I will be spending much time on the online art competition that I host called the American Art Awards [AmericanArtAwards.com] July is the last month for artists to enter their work in 55 categories. In August, 25 prestigious galleries will judge their work, and appoint the winners. Our roster of galleries is excellent and we try to get the very best gallery in each state to judge the American Art Awards.” The roster of galleries is not the only thing that is excellent.“Forgiving Troy” is one of the best true-life stories I’ve ever read. You can obtain a signed copy by going to thombierdz.com.

In addition to receiving accolades for his amazing book, Thom also is a world-renowned painter who is often commissioned for pieces from the public and from fans. Thom reports some of his most recent work. “Today a man picked up a commissioned portrait of his nephew who was killed in a car accident. This will be a gift to the father of ”˜Cole’ who was only 20. Lately I have been painting and bringing life to deceased people, and deceased pets. This is very rewarding work that I love to do between my acting shoots. I have always believed in life after death,” said Thom.

Speaking of acting, reports surfaced that one of the producers of “The Young and the Restless” says fans can expect surprises later this month on the show. In addition to mega talented Lauralee Bell returning to the show, so has actress Tricia Cast as Nina. Cast plays the ex-wife of Phillip Chancellor. Thom tells Canyon News, “Tricia has so many layers and is fascinating to watch. She delivers unabashedly every time she opens her mouth and she gets to play a judgmental mother now, 180 degrees from when she first started as a judgmental mother’s worst nightmare.”

On last Sunday night, Beverly Hills and Hollywood residents flew to Vegas to celebrate the 37th Annual Daytime Emmys. Holmby Hills producer Bradley P. Bell took home the Best Dramatic Series Emmy for the second year in a row for his hit soap opera “The Bold and the Beautiful.” Along with Brad were, his wife Colleen his brother Billy, sister Lauralee, mom Lee Phillip Bell, and sister-in-law Maria. The Bell ladies were truly the Belles of the ball. Dressed impeccably and all four as stunning as ever. Lauralee will be returning to the show that made her a star later this month. “Y&R” costars and fans are all excited about this.

In addition to “B&B” taking the gold for Best Show again, Brad also won for Best Writing and his Younger Lead Actor nominee Drew Tyler Bell (no relation) won as well. Maria Bell was so excited that her actor Billy Miller won for Best Supporting Actor. I said on May 30 that Miller would win, Drew would win, Bradley would win for Best Show, Julie Pinson on “ATWT” would win for Supporting Actress and they all did. Last year’s storyline on “B&B” dealing with dying with dignity, which starred Betty White, Susan Flannery and Alley Mills put “B&B” over the top, but sister soap “Y&R” also deserved an Emmy for Best Show. Too bad they couldn’t give both shows the award as a tie.

There wasn’t a dry eye in the room when Dick Clark, who is recovering from a stroke was honored by Ryan Seacrest for his lifetime achievements. Agnes Nixon the creator of “All My Children” and “One Life To Live” was also honored, and Miss Nixon gave a beautiful speech. Although Miss Nixon was credited with being the first to write storylines involving social issues of the times, that honor should also be shared with Beverly Hills socialite Lee Phillip Bell, who was truly a pioneer in the daytime TV genre and even before she did so with her shows “B&B” and “Y&R,” the Chicago native was the host of “The Lee Phillip Show.” This show featured political leaders from all over the world and social issues on behalf of women and children. Lee and her wonderful and talented family all live in the hills we cover. Lauralee recently summed it up best, “I am so proud of my mother, I am honored to have her as a mother, a mentor and my best friend.” We love you, Lee. Regis Philbin hosted the show, and he did an excellent job.

Legendary two-time Academy award winner Olivia de Havilland, who is best remembered from the 1939 film “Gone With The Wind” turned 94 this week. Though de Havilland is known most for her role as Melanie in the biggest film ever, she won her Oscars for “To Each His Own” and “The Heiress.” Olivia is still working on her autobiography and lives in Paris, while sister Joan Fontaine, just two years younger than Miss de Havilland lives in Carmel. The frosty feud between the two sisters remains as strong as ever. Check out my first book, which was published in 2005 on Joan Fontaine and Olivia de Havilland. “Letters From A Known Woman” is available on Amazon.

A special shout goes out to my dear friend Karen Black, who also celebrated a birthday this week.
The “Twilight” saga “Eclipse” opened on Wednesday morning at midnight. There was not a seat to be had in any theater in Hollywood or across the U.S. it seems. The film has made history by bringing in over $30M overnight. It’s the biggest Wednesday opening in film history. I still find myself on Team Edward, though at the premiere last week, it seemed Team Jacob is gaining ground. To quote Taylor Lautner as Jacob in the film, “I’m hotter than you!” Look for the film to hit the $200M mark by the end of the month.

“Rebel Without A Cause” star and TV director Corey Allen died on Wednesday in Los Angeles. Though he’s best remembered for the role opposite acclaimed superstar James Dean in “Rebel,” Mr. Allen was very respected and well known in the industry for his directorial work on shows such as “Murder She Wrote,” “Magnum P.I.” and “Lou Grant” just to name a few. Allen was 75.

Shocking news came this week that the divorce is almost final between Tiger Woods and his beautiful former model wife Elin. The couple attempted to work things out, but with a reported 18 mistresses coming out of the woodwork claiming long term affairs with the golfing great, his wife seems to have had enough. No, it’s not that shocking that the divorce is on, but what is surprising is that it’s being reported that Elin could walk away from the marriage with at least $750M. Good for her! More on shocking breakups in Hollywood. Filmmaker and actor Mel Gibson’s former girlfriend and mother of his youngest child has filed papers stating Gibson allegedly abused her and isn’t paying regular child support, while Gibson’s camp countered he’s paid her at least $10,000 per month since the breakup, has bought her a home in the San Fernando Valley and was refused his request to visit the baby on Fathers Day. Here’s hoping that what many call Mel’s midlife crisis doesn’t get any nastier. On Friday Radar Online reported yet another audio tape has been exposed that allegedly has Mel Gibson on a racist tirade against his former girlfriend. Gibson’s camp had previously stated Oksana made things up in order to get a restraining order, but the voice on the tape hasn’t been denied as Mel’s yet.

The new season of “Big Love” resumes shooting on Tuesday, July 13. From what insiders say, the new season begins with intense fallout from the revelation of Bill Hendrickson’s “outing” as a polygamous just hours after winning a state senate office in Utah. “Big Love” is truly one of the best shows on TV. I am grateful to a friend who created a campaign on Facebook to try to get me on as a guest star. If you wish to join, and I hope you do, go to Facebook | Support Tommy Lightfoot Garrett to Guest Star on the HBO Series BIG LOVE!

On Thursday afternoon Dean McDermott, who is married to actress Tori Spelling, best known from the ’90s hit show “Beverly Hills 90210” had a second motorcycle accident in the past six months. Dean is being treated at an L.A. area hospital for a punctured and collapsed lung. Tori tells friends, “He’s in a lot of pain, but doing better.” From ICU, Dean tweeted, “Thanks for the well wishes. A collapsed lung is no fun, and is a lengthy heal. Feeling pretty bad today. Day 2 is always the worst.”

This week on television be prepared for a lot of excitement! On “Y&R” Jill makes it official. She’s no longer Jill Foster Abbott, but Jill Fenmore. Fireworks at the Chancellor estate will be even more shocking this year than ever, Steffy lays down the law to Brooke and Oliver while Ridge makes a shocking confession about Hope’s graduation party on “B&B.” “ATWT” fans are falling hard for Luke and Reid, while Barbara Ryan is kidnapped, then by next Sunday night Alcide morphs to save Sookie on “True Blood.” Maybe you should stick to resting on July 4, because the week picks up on Monday and culminates to shock and awe by next Sunday.

Congratulations to Megan Fox and Brian Austin Green, who were married last week in Hawaii. Lindsay Lohan tweeted that she was punched on her 24thbirthday by a waitress for no reason. Looks like the Fourth of July holiday is starting out with real fireworks in true Hollywood style.

This week I kick off a new feature that I’ll be doing weekly for the Examiner soap columnist Laurie Flesch.  Laurie will be asking me questions about soaps and I will give my opinions. Hope you’ll click on the link if you ae a soap fan to read my opinions about a genre I believe is far from dying.  Examiner exclusive new feature ”“ The Soap Insider

Have a safe and fun holiday. See you next week!