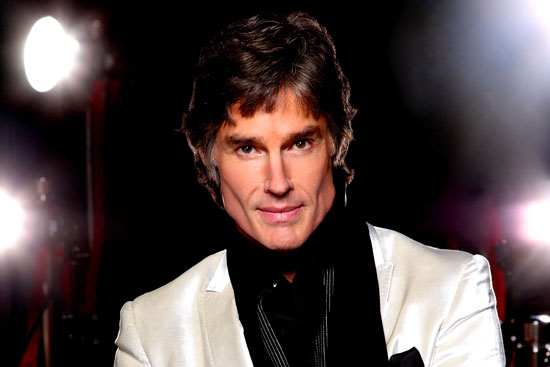 BEVERLY HILLS —This week in Hollywoodland I caught up with Golden Globe-winner Karen Black, who is excited about a lot of new projects, Ronn Moss who is commuting from Hollywood to Italy for “Dancing With The Stars Italy,” and there are lots of other happenings this week as Tinseltown prepares for Golden Globe night on Sunday.

If you think Ronn Moss has helped to make “The Bold and the Beautiful” one of America’s and the world’s most popular series, you are right. He’s now taking his fame worldwide for a whole new series. The season premiere of “Dancing with the Stars Italy” [Ballando con le Stelle] won the night in ratings on Saturday evening. Ronn Moss’s dance performance of the quick step achieved the highest audience numbers of the show with a peak of 7.3 million viewers. The show began with a 32.19 percent market share with 6.2 million viewers. He was elegantly dressed in a tuxedo, and did not miss a step of his routine.

In the end, Ronn was tied with three other competitors for seventh place after the technical jury’s scores were tabulated, and was not in the bottom four. After the final audience voting tabulations were combined with the jury scores, Ronn was not eliminated. Though he did not achieve immunity. Ronn has largely been the main focus of the reality show’s media campaign, and has graced several covers of Italian magazines.

Ronn will commute back and forth from Rome, where “Ballando” is broadcast live every Saturday evening, to Los Angeles, from now until the end of March, in order to continue taping episodes of “The Bold and the Beautiful.”

Here is a video excerpt from the broadcast, which features behind-the-scenes footage on the B&B set that we recorded just before the hiatus last December.

The next live broadcast is next Saturday, January 16.

NBC has become a war zone over the past few weeks. After canceling Jay Leno’s show the peacock network decided they’d shove Conan O’Brien’s “Tonight Show” from it’s decades long time-slot of 11:35 p.m. to 12:05 a.m. O’Brien fired back and said he refuses the be moved or he will walk and possibly go to the Fox network. Leno and O’Brien have spent the past week throwing stones at not only each other but their network as well. The winner in this? David Letterman over at CBS has seen his ratings soar and almost doubling Conan’s and Jay’s simply because he’s making the best jokes about the NBC feud or as we say in Hollywood, the fiasco.

Simon Cowell is leaving Fox’s “American Idol” at the end of the season and taking on duties bringing his hit-British show “The X Factor” to American shores. Walking away from a reported $36M per year salary at “AI” is not scary when he’s going to be raking in a reported $160M per year with his new series in America. Ellen DeGeneres who was hired to replace “Idol” judge Paula Abdul will have even more pressure on her shoulders to make “American Idol” a success and even if it doesn’t work, she’ll surely be blamed by critics and the network for its decline.

Dennis Hopper, 73, who is battling cancer has recently filed for divorce from his wife Victoria, whom he has 6-year-old daughter Galen. The actor is citing irreconcilable differences for the split, is offering spousal support and requesting joint-custody of their child.

Brittany Murphy’s death has hit everyone, but no one has been affected quite like her mother Sharon, who was extremely close to her talented and beautiful daughter. Sharon will be on “Larry King Live” on CNN along with Brittany’s husband Simon Monjack on Wednesday. Sharon found her daughter on the floor in the bathroom on December 20. It will be the first interview for the mother and husband of the late Brittany Murphy after her shocking death.

Supermodel Gisele Bundchen who shows more compassion and Christianity than Reverend Pat Robertson and radio-mouth Rush Limbaugh was so moved by the tragic earthquake in Haiti that the beautiful super-star has donated $1.5M to relief efforts. She understands that despite Haiti’s corrupt government that the people are suffering and deserve human empathy. Sounds like Gisele is not only a great ambassador for the many products she represents so beautifully but also a better ambassador of god than one who is ordained as a minister and the other who prides himself on making money off of suffering of man-kind both in Haiti and in America. Gisele made $35M last year as a model and in endorsements. Along with Gisele many other stars from Tyler Perry to Lance Armstrong have made donations to relief efforts and the Red Cross. 2010 Golden Globe nominee George Clooney will be hosting a telethon on January 22 on MTV to raise funds for Haiti relief efforts.

Good news for tweens and all lovers of the “Twilight” sequel “New Moon.” A release date for the 2-DVD set has been announced this week. At 12:01 a.m. on March 20, just in time for spring, Summit Entertainment makes this incredible film available to fans worldwide. The third film in the series, “Eclipse” is slated to be released June 30. Now if only HBO would set the release date for their hit vampire series “True Blood” season two, there would be tens of millions of happy fans. Myself included!

Star Lindsay Lohan who is doing her best to clean up her act and hopefully will stay on the wagon this time, recently spent time in India where she witnessed women and children who suffer in a way Americans can barely imagine. Lindsay in part tells Us Weekly in their recent issue out on the stands, “”Making this documentary for BBC3 has allowed me to lend my voice to the real hardship faced by children who are trafficked.” Lohan says to Us that she’s been humbled by the reality of it all. While Kate Gosselin who is the newly divorced mother of eight spent the week complaining about her new $7,000 blonde hair extensions. How very sad for her children that with all the serious issues the world faces, their mom is upset about her hairstyle. Remind me what the title of her now canceled show was on TLC? Amazingly, Kate is still loved by TLC and they have just announced an upcoming new reality show for the now single mom. Hurray!

Eric Braeden tells a soap magazine this week that those on Facebook creating pages pretending to be the Emmy-winning star had better stop playing with fire. Braeden calls it identity theft and reminds the creators of the faux pages in his name, “That’s what we have the FBI for.” Braeden added that unless these social networking sites manage these impostors better and verify people’s real identities, that there will be many lawsuits filed in the years to come. That’s what we love about Eric. He says what he thinks and he’s not afraid to tackle the fakes and haters out there who like to destroy or intimidate celebrities who are working hard for their careers, in a business that is difficult at best to work in. Look out on Monday’s episode of “The Young and the Restless,” when the billionaire returns with a new mission. To destroy all of his enemies and to get his family back in line.

“Y&R” stars are making big news in Hollywood this week. Actor Thom Bierdz tells Canyon News, “I am excited to be painting “Stick Figures” for Matthew Montgomery’s new movie. He has great taste I would have to say, in part because his boyfriend is my ex, the amazing Steve Callahan.” Here’s a nice interview Thom did about his painting.Click here: Elisa – My reviews and Ramblings – In the Spotlight: Thom Bierdz Thom’s one of the most respected artists to the stars, who is also a star himself.

With the Golden Globes coming up on Sunday night, I caught up with my friend Karen Black, who is a 1975 Golden Globe winning actress herself. Karen’s busy with many projects right now and she’s excited about “Funny or Die,” an upcoming show on HBO with Will Ferrell heading the series. “I’m very excited about 2010 and the series I worked on for HBO is something I really enjoyed doing. The series is about a number of skits that are hilarious and I really got into the part. My leading man was sensational as well.” Black is currently completing or working on the following, “A Single Woman,” “Double Duty,” “Katie Q,” “Nothing Special,” “Some Guy Who Kills People,” “Go Straight To Hell” and “Heated Rivalry.” For “Some Guy Who Kills People, Black said, “It was one of those great comedies that I loved working on.” Look for news on “Boarding House” and other projects from Ms. Black next week in Canyon News.

See you next week!