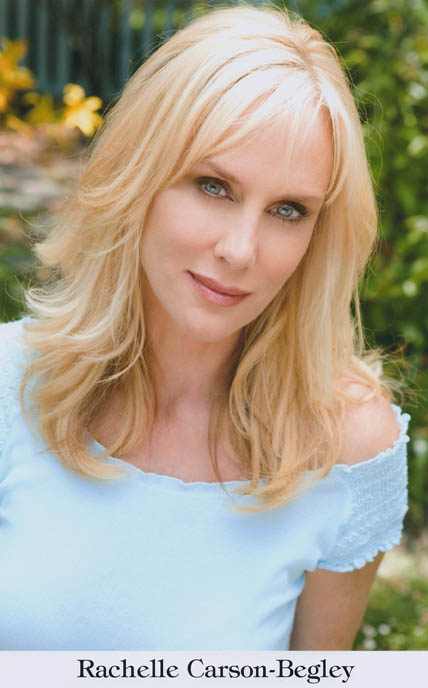 BEVERLY HILLS —This week the rains ended and so far no major mudslides occurred, but there were so many deaths in Tinseltown and also breakups and make-ups were part of the main news cycle all week, not to mention catching up with Studio City beauty Rachelle Carson-Begley was a treat. The Michael Jackson death-saga seems to be heading for some resolution and Tanna Frederick made big news. Here’s hoping an Oscar nomination will follow.

Rachelle Carson-Begley is the better half of “Living with Ed,” a series on the Planet Green channel that costars her multi-talented prolific actor husband Ed Begley, Jr. Rachelle says, “Things are going great for us right now, Tommy. We have almost completed season three of the show and Planet Green is a better fit for our type of series. HGTV was wonderful to give us our debut and start but their network had a narrow standard of home and garden in which they wanted all of their series to be included and our show was a bit more about personalities and Planet Green is open to that.” Begley added, “Tommy, you have to come out to see Ed’s newest gadget. It’s called a graywater. Ed hooked it up and now the shower and dish water goes through this system so that it’s cleaned enough to be used for our ornamental plants and the toilet now. It’s not the same water obviously we use for the shower or doing the dishes, but Ed drove me crazy for weeks while installing the irrigation system.”
Carson-Begley is also on a new mission. She tells Canyon News, “I am writing now. You know I go from one thing to another, but I haven’t auditioned for acting parts in over two years, the last major thing I did on TV was the final season of ”˜Boston Legal’ which I loved. But I’m now trying to get involved in writing, preferably about the supernatural. I’m not a fan of the ghost-buster type shows or things like that, but I’m very into the metaphysical and hope that I can do some writing about those subjects,” said Rachelle. The beautiful star of “Living With ED” can be seen on Planet Green’s cable channel on Wednesdays 6 p.m. PST and 9 p.m. EST. If you haven’t caught an episode of “Living With Ed,” I can vouch for its authenticity and great humor. Rachelle asked me to appear on the season finale of the first season three years ago and it was a real treat. Here’s a clip of my appearance. YouTube – Tommy L. Garrett on ‘Living With Ed’

On a sad note, beautiful actress and former “NYPD Blue” star Gail O’Grady filed documents in LA Superior Court on Friday stating a man has been stalking her and her 5-year-old son, showing up at a store she owns and her son’s school. She also claims the man has been calling and sending dozens of text messages per day. The man reportedly made a business offer to O’Grady, who refused and since then she claims he’s been harassing her and she fears for her life. The actress plans to go to court on February 18 to ask the judge to make the temporary restraining order a permanent one.

Word is the L.A. District Attorney’s office is finalizing their plans to seek action against Dr. Conrad Murray in the death of superstar Michael Jackson. However, leave it to Joe Jackson, Michael’s father who now is demanding in court documents also filed on Friday that he be allowed and his medical experts and lawyers a chance to view all of his late son’s medical records at UCLA Medical Center in Westwood, where Jackson was taken and pronounced dead upon arrival. The lawyers for the Jackson estate however disagree with Joe’s plans and are fighting to block Michael’s medical records from being released to his father and his legal team.

Actor Pernell Roberts died earlier in the week. He was the last survivor of the western series “Bonanza” that was such a huge hit in the ”˜60s. Actress Ruta Lee worked with him in that era and once told me of her fondness for Roberts and all of his costars. “They were all wonderful gentlemen to work with and to know. I really enjoyed doing an episode of ”˜Bonanza’ and Pernell like all of his other leading men were great to me,” said Lee. Roberts also starred in the 1980s series “Trapper John, MD.”

In addition to Mr. Roberts, Hollywood lost another beloved star this week. Zelda Rubinstein, the diminutive psychic in the ”˜Poltergeist’ movie series, died at 76, after suffering a heart attack. Rubinstein was a frequent visitor to pianist/entertainer Bryan Miller’s night at The Other Side, among LA’s last remaining piano bars. One of Miller’s singers, David Johnson, recalled, “Zelda would sit right down front at Bryan’s piano. She adored him. Myself, I loved singing directly to her and flirting with her. She was a wonderful audience. We all will miss her!” Rubinstein was also an outspoken activist for little people’s rights as well as a tireless supporter in the fight against HIV/AIDS.

“B&B’s” Ridge Forrester, actor Ronn Moss’s salsa performance keeps him in the “Dancing with the Stars Italy” competition. The third episode aired live on Saturday, January 23. On the third evening of competition the show started with a surprise competition: two contestants (one of which was Ronn) were asked to perform their last dance again, this time as a solo performance. Like the pro he is, Ronn performed his Paso Doble dance, without his partner and scored 40 points, which ranked higher than the other competitor. Later in the episode, Ronn and his partner, Sara di Vaira, performed a very difficult Salsa dance, scoring 24 points. Luckily, when the 40 points from the Paso Doble were added to the Salsa score, Ronn was safe, remaining in the competition. The fourth episode will air live on Saturday, January 30.

In the gossip world this week the biggest stories were Brad and Angelina breaking up, with speculation that he’s just purchased his new bachelor’s pad. While many journalists have chased this story all week, friends close to the couple say that they have just decided to live two separate lives and will not be splitting for the sake of the children. While The National Enquirer and Globe writes “Irene In Time” leading lady Tanna Frederick and Noah Wyle, who is her leading man in Henry Jaglom’s upcoming “Queen of the Lot” had a fling that fizzled. Already Tanna is on the town with a couple of very handsome leading men, including one that is a ”˜werewolf!’ The “Hollywood Dreams” beauty laughed when I asked her about the rumors and stories and only wanted to talk about the great films out that are making Oscar buzz. Her own “Irene In Time” included. We’ll all find out on the morning of Tuesday, February 2, who are the nominees. With the Academy now listing 10 movies not five, many believe “Irene In Time” could land an nomination alongside “The Blind Side” and “Avatar.”

Good news for Tiger Woods. Word is that his beautiful Swedish wife Elin is planning on giving the serial cheater a second chance. Maybe that should be seventeenth chance, since over 16 women have come out of the woodwork to claim intimate relations with the golf giant. Elin reportedly wants to keep her family together and work things out. Good luck to the Woods family. However, just think about this scary thought: John Edwards who was a 2008 Democratic contender for president of the United States had a chance at that job. Now two years after that historical run, we find out from a former campaign aide tells of not just covering up Edwards’s affair with Rielle Hunter, but the aide tells ABC News that he found a sex tape which he knew to be John Edwards with a then very pregnant woman, whose face he did not see. Can anyone ever consider a more reckless person running for president? Andrew Young’s bleary-eyed innocence has now become a very serious expose’ on the man who could have led the free world. If you think Hollywood is a shocking place, read “The Politician: An Insider’s Account of John Edwards’s Pursuit of the Presidency and the Scandal That Brought Him Down.” It is available this weekend from Thomas Dunne Books. Beware, it’s not for children or the faint at heart, or the possible 1 percent of Americans who still have faith in politics and our political system. Louis B. Mayer or Harry Cohn could never have made this up. Orson Welles’s “Citizen Kane” has nothing on this shocker.

Kate Linder’s upcoming February 11 ALS event at The Montage in Beverly Hills has added “Y&R” costar Thom Bierdz, who tells Canyon News, “I am really excited to be attending my friend Kate’s event. I’ll be doing paintings for people who attend the event with the proceeds going to the charity.” Kevin Sorbo had to drop out due to a scheduling conflict, but his fans will be happy to hear it’s for a film he’s been cast in. Others added to the star-filled event include actor Gordon Clapp from “NYPD Blue” and Joan Van Ark from “Knots Landing.” For tickets call 570-677-4975 or e-mail events@emergingmagazine.com.

“Twilight” and “New Moon” heartthrob Robert Pattinson, who portrays the vampire Edward Cullen is the subject of a new comic book. It’s called “Fame: Robert Pattinson,” and is a look at the handsome young leading man’s life from his start as an actor to his current work in the “Twilight” series. The 32-page photographic tome will arrive in stores in May. Just in time for kids to buy for Mother’s day.

Remember those we lost this week and their loved ones. See you next week! XOXO