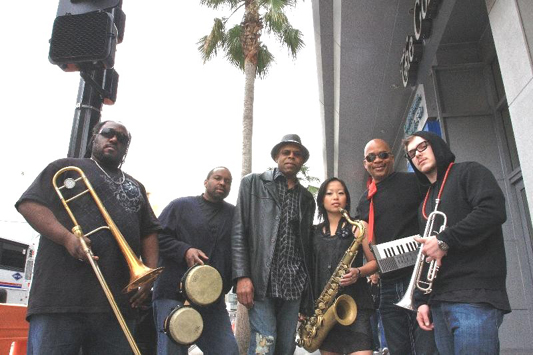 BEVERLY HILLS—When songwriter/producer/musician Wayne Vaughn collaborated with Earth Wind & Fire’s Maurice White back in 1981 to pen “Let’s Groove Tonight,” neither had an inkling the song would transform into not only one of the group’s biggest hits, but also a universal party anthem for years to come. On Friday, March 12, “Let’s Groove Tonight” will be the reoccurring theme for the latest explosion of “L.A. Nights…in Beverly Hills” presented by ultimate party hosts, 3 The Hard Way Entertainment Group, comprising Kevin Rouse, Pernell Clark and Lennell Jones. Vaughn will be joined by his band, the nine piece ensemble, “Three Generations of Groove” as they rock some of his famous classic originals and cover some of music’s funkiest blends.

The Heavy Hitters Comedy Hour for the night will feature funny man Tommy Chunn and the hilarious Speedy, known from Sirius Satellite Radio’s “Foxxhole.” The uniquely, gifted singer Ieisha Warwick will perform as well and DJ Darius Farrely aka Disco will ignite the dance floor as comedy, music, dining, drink and dancing reign at the Camden House in Beverly Hills on 430 N. Camden Drive.

Wayne Vaughn is heralded as one of the music industry’s first class groove masters. A consummate pianist, he has also penned several hits for Earth Wind & Fire including “Something Special” and “I Wanna Be with You,” in addition to songs for Patti LaBelle, Aretha Franklin and the Emotions. With Three Generations of Groove, Vaughn combines the talents of some of the music industry’s best session players, with members of his own talented family, including his wife, Wanda Vaughn of the Emotions and his young adult children, to create a musical kaleidoscope of simmering funk!

“L.A. Nights…Beverly Hills” keeps getting better and better,” expresses Rouse. “Marva King sizzled with sass last month while comedian Doug Williams had the audience in stitches. Los Angeles is definitely taking note as we continue to offer one of the best nights out on the town!”

A portion of the proceeds from the evening will benefit Brother II Brother, brotheriibrother.org/a city-wide mentoring program for at-risk, inner city kids.

Male In His 60’s Is Assaulted In Santa Monica