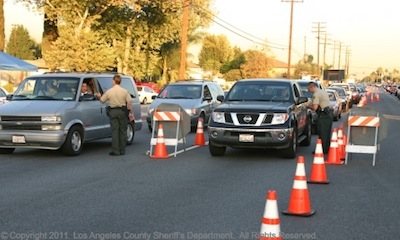 Officers from the Malibu/Lost Hills station checked a total of 1,535 drivers for driving impairment and proper licensing at the checkpoint located on Pacific Coast Highway and Cross Creek Road from 7 p.m. to 3 a.m.

Police also arrested 14 unlicensed drivers. One vehicle was detained for a day and two vehicles were impounded for 30 days.

The LASD regularly schedules DUI/CDL Checkpoints throughout the year to ensure public roadway safety. “Saving lives, reducing injuries, traffic collisions and property damage is important work,” said Sheriff Lee Baca in a statement. “Every life is a life worth saving and we will do our utmost to help keep the public safe.”