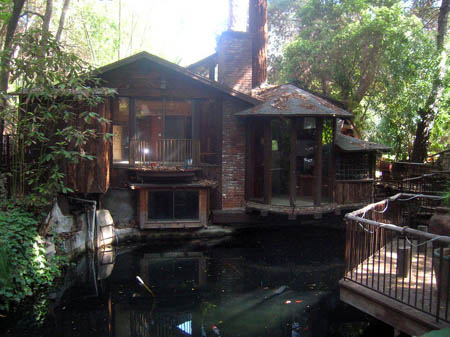 LAUREL CANYON—Whaddya think about when someone mentions Laurel Canyon? Is it the legend that a famous horse was buried under the bowling alley in the basement of 2401 Laurel Canyon? Or that one of the early owners of the property was a pall bearer for Wyatt Earp? Somewhere in the back of your mind you admit that there is almost nothing that is too weird for Laurel Canyon.

I’ve written about the famous Upper Tree House, which is all that remains of the Laurel Tavern originally built in 1915 on the northeast corner of Laurel Canyon and Lookout Mountain.  The Tavern was part of the earliest development in Laurel Canyon, known as Bungalow-Land.  The building served as a way station for the Trackless Trolley that brought visitors up to Lookout Mountain.

One of the early owners of 2401 Laurel Canyon was Tom Mix. Who’s that you ask? We know the name, but how much do we remember about the man? Typical of local residents he was a colorful character.

Tom Mix was born in Mix Run, Pa.  Tom Mix from Mix Run ”“ that surely must have been the middle of nowhere in 1880 when Tom was born.  He grew up working on a local farm and taught himself to ride horses. He became an impressive rodeo competitor, and perfected daredevil acrobatics on horseback. He’d always dreamed of being in the circus, the wild west shows that were so popular at the time. As a kid, in 1890 he saw Buffalo Bill’s Wild West Show.  He met Will Rogers—a rodeo clown at the time —at the 1904 St. Louis World’s  Fair. He moved to Dewey,Okla. where he was a bartender and the town marshal.  Mix at the ripe old age of 19 landed a job at the Miller Brothers 101 Ranch, and worked for the Miller Brothers Wild West Show.  Things were only going to get better for this cowboy.  The 101 Ranch regularly supplied cowboy extras to the movie industry.  William Selig’s Polyscope Company [which had just moved to California] began filming “Ranch Life in the Great Southwest” [1910] in Oklahoma. Mix signed on to “handle the horses” but wound up on film.  Mix and others, where filmed bronco busting, bull-riding, steer tying and branding. He was a hit.

So where does the most famous silent film cowboy who earned over $6 million dollars during his career choose to live? Yup, Laurel Canyon.

Mix was known as a wildly entertaining cowboy.  He’d adopted a dapper dandy-ish style which contrasted with his exciting cowboy showmanship. He made over 250 movies. And it as rumored that his sidekick, “Tony The Wonder Horse” who was as famous as Mix himself was buried under the bowling alley of his Laurel Canyon home. Truth or fiction? Tony the Wonder Horse was named as a survivor in Tom Mix’s obituary, and was also the beneficiary of Tom Mix’s will. Tony was retired to the Tom Mix Ranch in Arleta.  He outlived the cowboy for two years. Could it be that Tony The Wonder Horse’s final resting place is actually under the house? Was it all secretly arranged by Tom Mix’s faithful lawyer?