BEVERLY HILLS—A few nights ago, someone asked me the age of my readership. Of course, being a newer columnist to the paper, I didn’t have an answer. When I asked my friend why, she told me I should discuss my secret money-sharing application unless my readers were too old to Venmo.

Before I tell you anything about why age matters, I must ask you: have you heard of Venmo?

If the answer is “yes and I love it”, I would be willing to bet you are 30 or younger.

If the answer is no, and the concept interests you, but you’re still cautious, you are probably under 40.

If you are completely opposed to Venmo, you are certainly over 40.

How have I come to this conclusion? I initially thought how dare my friend age someone based upon their app preferences, but let me tell you, this formula is spot-on.

So, I went about asking just about everyone I knew (and didn’t know) so I could test the validity of this theory, does age matter in Venmo?

I met two relatively hip, older friends for sushi at Sunset Plaza. Both are actors who played boyfriend and girlfriend on a popular television series. Naturally, both are concerned with their age and on-camera appearance. During dinner, age came up, ad nauseum.

One complained of how old and fat he looked on screen, the other assuring the producers made him appear that way to fit his character. They continued comparing each other’s age as I sat there, growing rather bored. When I tactfully tried to change the subject, they both complained of how I was so much younger than them.

That’s when I objected. I hate when my older friends pull the age card. I feel mature for my age, always getting on best with people 10-20 years my senior. I enjoy being treated as an equal. Then, when age comes up, I’m suddenly discriminated against by the same people that make age such a huge issue. Why is that?

As the conversation continues, I get the idea that this is the perfect opportunity to test my Venmo theory as I wonder how we’re going to share the bill and if age really matters.

Correcting my friend, while laughing, I say, “No, Glide is a video app and Venmo is a money app”. Neither had heard of it, so I continued to explain how it works to both of them, who sat bewildered, unable to grasp the concept.

In my head, I’m screaming, “What is there not to get?” This is a simple app for free money exchange between individuals. What is so confusing about that?

After I explained the details, both were uncomfortable with the idea of someone having their bank account on file. I explained more and then one of them agrees that it’s a great idea, since Venmo would allow him to send money to his tenants to fix things without having to physically drive to the bank and then to the property. So he agrees to start using Venmo. In my head, I’m thinking that my Venmo age theory had just failed. He’s hooked on Venmo and is going to register.

I happened to see him the following day, Christmas Eve. We had dinner at the Ritz Carlton, Downtown, Los Angeles, where more of his older friends joined us. There were seven of us and we were all splitting the bill. I asked my friend if he had successfully set up Venmo. With a sad grin he said, no, pointing to Mary, who was sitting next to him and had completely changed his mind in the last 24 hours!

A large part of the conversation during dinner was speaking against Venmo and me defending it. Of course, they were all over the age of 30. It was very clear to me that these people had no concept of the app.

I look at Mary in bewilderment, trying to figure out her objection as she pulls out her plastic old school credit cards to pay.

“Oh, it’s not safe,” Mary says, presenting her credit card on the table, showing the world the one number linked directly to her bank account. Anyone in view could have easily obtained the information.

How can it not be safe? You trust a credit card. The waiter can easily take those numbers and go online shopping with them. It’s easier to defraud one person with a credit card number than their password protected Venmo account.

It was obvious that the only Venmo age person at the table was me. Of course, the other six people disagreed with me, a huge contrast to my regular friends meeting for dinner. I rarely have reason to pay friends, but when I do, Venmo is definitely the way to go. No one beneath the age cutoff believes it unsafe.

I felt it was six against one and I was quickly losing the battle. I felt offended as they spoke so harshly of my immaturity and blind trust in the internet. Out of spite, I threw my last comment out: they had all proved my friend’s theory correct. People over 30 just dont get Venmo and never will.

The oldest guy at the table turned to me and said, “Well, you know, that’s because the people under 30 aren’t as smart as the ones over 30.”

That did it. My mouth was shut for good. No Venmoing was to be done with these elderly people.

So the argument concluded and proved the Venmo Age Theory. 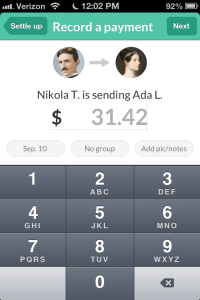 The waitress arrives with the check. She explains the restaurant policy of allowing only one method of payment. Feeling like I had the last laugh, I tell them if they all had venmo, this wouldn’t be an issue.

Then, me, the only one with cash and venmo has no problem, as I offer up my share and let the others duke it out for the next twenty minutes.

Where does one go at midnight on Christmas Eve to get cash? An ATM somewhere in the dark heart of downtown LA is not a very safe option, but that’s exactly what they did as I sat at Starbucks waiting for them to risk their lives because they are too closed-minded to use Venmo.

So my 40+ year old friends search for an ATM in downtown LA, a place you can be mugged at gunpoint for or card numbers that can be stolen by a hidden cameras and subsequently used in India, Mexico, or any number of places to rob their bank account. Of course, this is all in the name of reimbursing my other anti-venmo friend over the age of 40 who used her credit card to pay for everyone’s food. Now, she has to go to the bank and deposit a wad of cash the day after Christmas. Of course, she too could be robbed of all of that cash. What a mess!

So my theory proved that Venmo is only for those born before Dec 31, 1984! If you were born after, I’m sorry you’re just too old to Venmo… until you get a clue that Venmo is a brilliant secret!