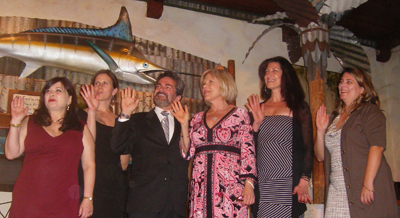 TOPANGA CANYON—On Saturday, March 5, business owners in Topanga Canyon gathered at Froggy’s Topanga Fish Market to celebrate the 62nd Annual Awards. Chamber of Commerce members D.J. Nellis and Jennifer Babcock were at the door greeting people as they arrived. The event started at 6:30 p.m. with time to socialize and enjoy hors d’oeuvres.

After people had an opportunity to meet and mingle, Bruce Royer, president of the Topanga Chamber of Commerce, welcomed everyone. Royer started by recognizing Jim Machowski, a fellow Topangan who had recently passed, and asked for a moment of silence. This solemn recognition was followed by Arthur Nissman who led the Pledge of Allegiance and the National Anthem, which was played by Devitt Feeley on his guitar.

Sherry and Bob Jason were presented with the Citizens of the Year award for their creation of City Hearts: Kids Say “Yes” to the Arts (cityhearts.org) 26 years ago, which to date has helped 28,000 inner city children who are at risk. When asked about the organization Sherry Jason said, “Children need the arts to nurture and inspire them. Our community’s most impoverished children live in dire circumstances without any access to arts education. City Hearts provides nurturing in a critical time in their lives, helping these children grow and feel connected to their education and dream of a better future.”

The Home Business of the Year award was presented to Bungalow Art (bungalowart.com/bio.asp), owned and created by Robyn Feeley. In her biography Robyn writes, “During my first art show, I sold a dog portrait. My second sale that day was a commission for another dog portrait. The light bulb went on, and thus my pet portrait business began.” Robyn is known for her creations of “Pet Pawtraits” and donates part of her sales to non-profit animal organizations.

The Business of the Year award was presented to Urs Baur and Sara Baur Harding, founders of the Topanga Film Festival (topangafilmfestival.com). Part of the Topanga Film Festival’s mission states, “The festival endeavors to bridge cultures, create and expand community, provide cultural exchange, networking opportunities and educational outreach.” During his speech Urs said, “We were on the fence. Are we gonna do it again? And this award came at a good time.”

The program closed with the induction of the new 2011 Board Members to the Topanga Canyon Chamber of Commerce. The induction was led by Susan Nissman and Assemblywoman Julia Brownley. At the end Julia Brownely asked, “Do you solemnly swear”¦.to insure the arts are preserved, not only in Topanga, but in the rest of the world.” She was answered by the Board Members with a resounding “Yes.”