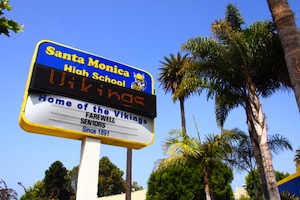 The environmental testing update released by the Santa Monica-Malibu Unified School District’s (SMMUSD) Environmental Task Force on November 22 found “a very small number” of areas at Santa Monica High School that contained levels of PCBs exceeding regulatory limits. The US Environmental Protection Agency (EPA) stated that these preliminary findings pose “no acute health risk” and that it is still safe to inhabit the shared middle and high school classrooms containing the chemicals.

Sandra Lyon, the Superintendent of SMMUSD, stated in the update that the majority of preliminary PCB tests conducted on campus were well within acceptable limits set by the EPA and that the PCB “trigger levels” found in the caulk of several classroom windows “do not indicate any immediate health risk.”

According to a PCB Fact Sheet for Schools by the EPA, buildings built or remodeled before 1978 commonly used caulk-containing PCBs (polychlorinated biphenyls) before they were banned. As caulk ages and cracks, the PCBs are released and can enter the air, soil and surrounding building. The EPA states “High levels of PCBs in the body can cause adverse effects on the immune, reproductive, nervous and endocrine systems. PCB exposure could result in cancer.”

The school district’s next step will be to continue further testing with the EPA and the California Department of Toxic Substance Control Agency (DTSA) and begin site remediation.

Superintendent Lyon will be holding a study session with the Board of Education at the District Office on December 12 at 5:30 p.m. to recommend district-wide PCB testing and remediation efforts and how to improve communication channels between districts and its concerned community members.

The environmental testing at Santa Monica High School began when 21 Malibumiddle and high schools teachers sent a letter to the school district expressing their belief that contaminant in campus buildings shared by the teachers were causing a variety of health issues. Three teachers were diagnosed with stage 1 thyroid cancer within six months, and others complained of ailments such as hair loss, migraines and rashes.