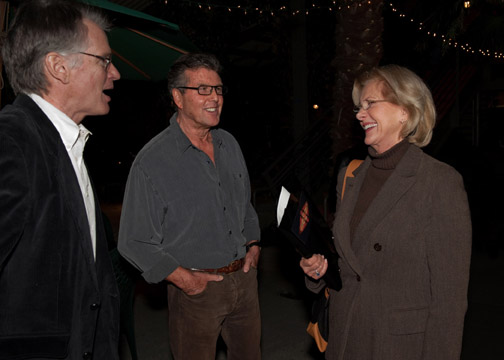 HOLLYWOOD —Award-winning writer, Hilliard Guess, proves he is equally as talented as a director and executive producer with the debut of the theatrical short film “Troublesome” at the Renberg Theatre on Wednesday, February 17. “With the destruction of jobs after the WGA strike, I took an active position in my life,” recalls Guess. “I’d proven myself as a writer and developed ‘Troublesome’ as a project for me to produce and direct.”

The storyline takes its characters and patrons on a rather fast-paced emotional ride considering it takes place on board a stranded subway car with no promise of rescue. “There’s a reason I chose a subway as our one and only location,” says Guess. “It’s contained, confining and worst of all … Dark!” With Oxygen fading and tensions rising, confrontations lead to confessions—and ultimately discovery—in this well-written and performed tribute to what can be accomplished with a low budget, when you have both talent and dedication to produce excellence.

The cast is complimented by the work of director of photography, John Savedra and a remarkable musical score that included “My Life’s Kritikal,” produced by Mike Greene with Lyrics by Dert Julian and performed by Kareem Grimes. “Troublesome” should be submitted for consideration as a Best Short Film Live Action for the 2011 Academy Awards.

Check out hilldogproductions.com/troublesome.htm for more information.

Nursery Cans Are Only Temporary

One Person Wounded At Twentynine Palms Marine Corps Base