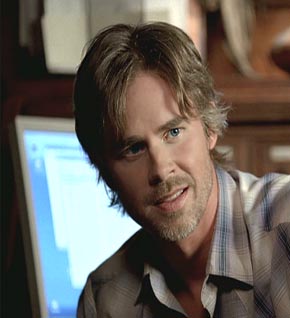 HOLLYWOOD—“True Blood” showed an encore of season one earlier this week on HBO. Fans were finally able to catch up with the show and all the hype last season, season two, were treated to season one’s marathon filled with the  basics of their favorite characters in Bon Temps from the first season. After watching the “True Blood” season one marathon, it became abundantly clear to me that actors Ryan Kwanten, who portrays Jason Stackhouse, and Sam Trammell, who portrays Sam Merlotte, are true scene stealers and are solid in their performances. Ryan on one hand is an Aussie who manages to play the country southern hick from the U.S. brilliantly and with such great humor. Sam is a classically trained thespian whose solid performance in each episode makes you take notice of his presence amongst some of the most handsome actors on television.

Ryan Kwanten who dabbled in soaps down under and modeled, brings a fresh energy to a series that can often be very high drama. Watching Jason torture himself over being accused of murder in season one was hilarious to see again. He’s one of the most easily influenced chaps on the planet. All he needs is Deputy Andy’s pressure or description of a crime scene and he’s off and running, while confessing to murders he did not commit. Kwanten’s able to play it believably and not childish in any way.

Fan Nia commented on the TrueBloodNet.com site, “My husband does think Jason is the best thing on True Blood. Let’s face it ladies, the guys will not want to watch it for the vampires, that’s our job. His [Jason’s] lines, expressions, and actions are so much fun and I think he is just priceless. So much better because he’s on the show. But then everyone is. [sic]” So many fans find Kwanten hilarious to watch and mostly male viewers as Nia brilliantly pointed out.

When it comes to the one guy everyone in Bon Temps can depend on to stand by them during difficulties and even give them a helping hand, it’s Sam Merlotte. With his “low rent” family on the way for season three, fans are speculating about their influence on Sam and what it means for the character in the future. With a werewolf and even more vampires coming to town, Sam is bound to butt heads with even more residents of Bon Temps and most fans will be cheering him on from the side-lines.

Lizzie in Australia feels Sookie and Bill belong together. “To tell the truth, I love the romance of the story between Sookie and Bill. I do not want her to be a skank like she is in the books, but to show the audience that there can be true love and that a couple can fight through thick and thin for each other! [Sic]. At least with Jason and Sam looking after Sookie, she may find herself in less danger this year. Both actors are reportedly in big story lines for the upcoming season. Who will Jason hook-up with the next time? He’s a man who is always in lust, while Sam’s true love Sookie will have her hands full looking for Bill who was kidnapped at the end of the second season, snuggling up to a werewolf and even dealing with more of Eric this time around. Fan Mony, really enjoy the chemistry between Sookie and Eric. “He was there for her every time, he sent someone to look for her, to protect her and he always arrives first, always, and the only one time he doesn’t come to her aid was in book nine because he was feeling all of her tortures,” said the Trubie. Mony spent much of her Christmas holiday on the site monitoring and debating with others about Eric. Mony’s a real Alexander Skarsgard/Eric Northman fan.

“True Blood” continues it’s ascension in the realm of TV’s cult classic genre. Fans love their most favorite characters and with regard to Stephen Moyer [Bill] and Alexander Skarsgard [Eric] there seems to be very little compromise in supporting the two. That’s a shame, because both performances are excellent. However, when it comes to Sam and Jason, their ardent supporters love them and their fan base seem to be the guys who love seeing Jason in trouble or giving out humorous one-liners and they also admire Sam Merlotte for always being willing to sacrifice himself for others. They are two men’s men for sure.
“True Blood,” Two Men We Love.”

Season three is being filmed presently.