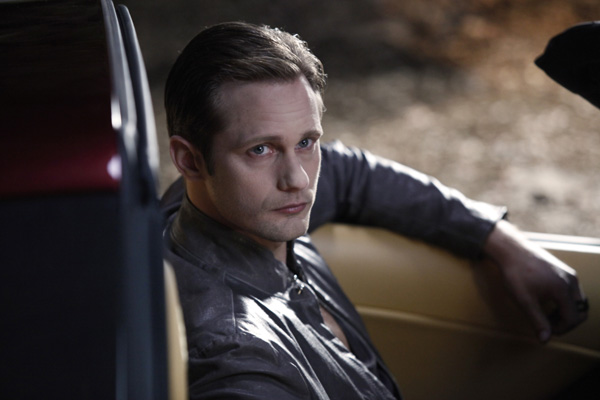 HOLLYWOOD —Sunday night’s encore episode of “True Blood” titled “Hard Hearted Hannah” was as magical as it was the first time it aired last season. Highlights of the night include, Tara and Eggs were driving down the highway when he suddenly realized he had memories of having been there before. Soon the two pulled over in Maryann’s car and they decided to explore the nearby woods. Eggs eventually realized it is an evil place. He also had flashbacks of being at the location, but became very upset when he could not figure it all out. Tara wisely suggested they get out of the woods and go back home.

Sam and Daphne were having a wonderful time while frolicking in the woods shifting from animal to human. She soon had a surprise for him that was not very welcomed by Sam. Daphne handed Sam over to Maryann who began gyrating when the bull horned mask was placed over her face. Fans recognized the bull from two episodes earlier when Sookie was attacked by the mysterious creature on the road. Eric makes a bigger impact in this episode and was out to take possession of Sookie and has Bill’s old girlfriend Lorena, who has not seen Bill for 70 years. She arrived at the hotel in Dallas sensing Bill in a room with Sookie. We learned that Bill was not always the gentle, mild-mannered vampire he is today. In flashbacks the storyline showed how Bill and Lorena, his maker were hunters of the innocent.

Also in Dallas, Sookie was partnered with Hugo — another human who is dating a vampire — for their visit to the Light of Day Institute. Posing as an engaged couple looking for a church to wed, they met the Newlins and have a tour of the church, but Steve also had a surprise for them. Hugo is a double agent and although Sookie doesn’t realize it yet, she will soon grasp the real danger she’s in because it was Hugo who sold her out as a spy for the vampires trying to infiltrate the church.

Jason was asked to build a scaffold for a sunrise ceremony where a vampire will be exposed to the dawn sun before the entire congregation. Jason began having serious doubts about whether he wants to be part of this group. It is too late for someone who is involved with the Light of the Day Institute. Who is it? You’ll have to watch Sunday night’s episode to see who bites the dust so to speak.

On an exciting note. HBO and Alan Ball are releasing a mini-episode to air after this Sunday night’s encore event of “True Blood.” The segment features Eric in what is going to become one of the most exciting episodes of the new season this summer. To take a sneak peek go to YouTube – True Blood Minisode Eric and Pam Audition HD.
Photograph of Alexander Skarsgard as Eric Courtesy: John P. Johnson/HBO