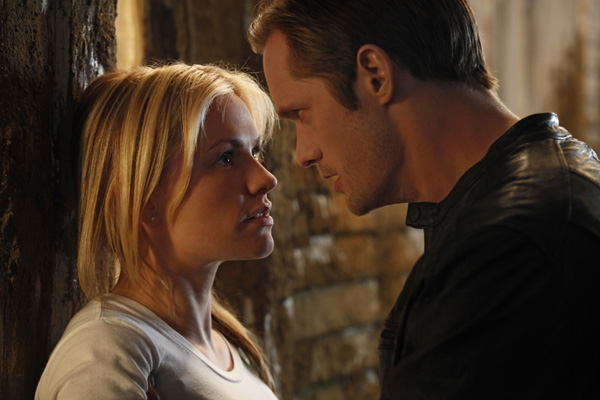 HOLLYWOOD—On Sunday night’s second episode of “True Blood,” fans got to see vampire Bill Compton stop the pack of wolves from devouring him. Bill had fed on a human, so his superhuman strength was superior to the wolves who attacked him. Killing three, tearing the ear off of one, Bill was stunned to find out the King of Mississippi was in fact behind his kidnapping from Louisiana. The king has plans to force Queen Sophie Anne to marry him and is enlisting Bill in his diabolical plan.

Sookie’s desperation to find Bill landed her in grave danger. Almost being attacked by a werewolf, the mind reader was able to hear the thoughts of a man who could morph into the canine terror before he had the opportunity to pull off his attack on Ms. Stackhouse. Tara went on a ride that should have changed her life. Her determination to end her own life was interrupted by her cousin Lafayette, who then forced her to go visit his mother, who is in a mental hospital suffering from schizophrenia.

Lafayette caught the eye of a handsome male nurse named Jesus, whose secret abilities have yet to be revealed. His mission was to prove to Tara that she has to fight the emotional demons she’s facing or face a life like her own mother’s or her aunt’s.

Ultimately Tara didn’t pay a great deal of attention to her cousin’s lesson, because she ended up in a fight with two rednecks outside of Merlotte’s Bar, who managed to get themselves in a great deal of jeopardy by a stalking and menacing vampire who came to Tara’s aid. That aid is soon to become her downfall.

Eric continued to flirt with Sookie and Jessica misplaced the dead trucker’s body. Someone went into Jessica’s home and stole the body of a man she fed off of, but did not intend to kill, then asking Pam for advice on how to dispose of the body, only to return home to an empty house and missing body. Hoyt later arrived at her door, but she refused to try to work things out with the young stand-up guy, who is desperately in love with her. Jason’s emotional descent after killing Eggs has spiraled down, but before he hit rock bottom, he was able to assist Deputies Andy and Kenya on a drug raid and ultimate arrest of a suspect.

Eric and Sookie were on her front porch when he demanded that she invite him in. When Eric entered Sookie’s home, a werewolf was snarling in the middle of her living room. Eric and the wolf attacked each other, with Sookie firing a shot from a gun given to her by her friend Terry. As the episode concluded, even more questions and mysteries were at hand. Lorena also went down in flames, as Bill threw an oil lamp into his maker’s direction.

Join us on the “True Blood” official Facebook page at Facebook | True Bloodand let us know how you feel about one of television’s most exciting cult classics in history.

HBO has renewed the hit show “True Blood” for a 12-episode fourth season, it was announced Monday by Michael Lombardo, president, HBO Programming. Created by Alan Ball, the series will begin production of new episodes early next year in Los Angeles, with debut set for summer 2011.

May Sweeps Lackluster Drama On “Young And Restless!”