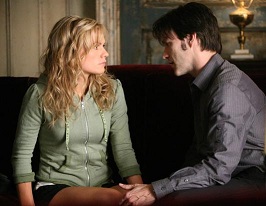 HOLLYWOOD—Last week’s debut of season three on “True Blood” was nothing short of what fans were expecting. The show was exciting, bloody, fantastically written and acted, and titled “Pack of Wolves” was so appropriate. Fans got to see what happed to Bill. Seems several men kidnapped him for his blood. Vampire’s blood or “V” as it’s called is very valuable and these men were behaving like addicts, as they went racing down the road headed to Mississippi, where the car missing a deer veered off the road into a ditch, leaving one of the men dead, Bill escaping and a bigger mystery began.

Sam on his way to find his family found himself in a cheap motel room having homoerotic dreams of Bill as well. That came from out of the blue, yet fans should have expected it. On the season finale of last season, Bill gave Sam his blood to heal him from the stabbing into his heart of the knife which Eggs and Maryann had planned Sam as the sacrifice to “The God Who Comes.” The scene came out of nowhere yet it made perfect sense.

Jason was sent spiraling out of control after shooting Eggs. Even with two young sexy ladies in his bed, he was unable to consummate any affairs over the evening. Deputy Andy has taken the blame for shooting Eggs, which left Tara frankly devastated and crestfallen. Lafayette left Tara with her mother Lettie Mae, which was a huge mistake. Tara listened to Reverend Daniels, who her mother invited to talk to her, but Lettie Mae was more interested in the reverend herself and didn’t pay attention to Tara when she went into the bathroom to take an overdose of pills. Just as Lafayette arrived and was scared for her life, banging on the door, Lettie Mae realized her mistake.

Sookie spent the episode trying to convince Deputy Kenya, Sheriff Bud and Eric Northman to help her find Bill. Queen Sophie-Anne showed up and became a thorn in Eric’s side when she demanded he sell “V” and bring her more money. The Magister of Louisiana also showed up and became suspicious of Eric and the queen.

Fans were celebrating on the official Facebook page for “True Blood.” Before the show fans and viewers were prepared to enjoy the pre-show and the episode. Alejandro Herrera stated, “So pumped to see Sookie again!” Sheila Santra posted, “20 minutes people! Put the dog out, pizza ordered, drinks poured! So excited!”

Then as the episode started and progressed, fans were very pleased with what they saw. Creative genius Alan Ball pulled it off. Season three is more exciting than the previous two and it’s just been one episode so far. As the episode came to a close, Bill Compton, who fed on an elderly lady, then glamoured her so that she would not remember his visit. Started running through the woods only to find the ones who kidnapped him in the first place. The problem? They were no longer men, now they are in the form of wolves. Bill warned them that he had fed, then attacked! The show ended. The fans on the official FB page were ecstatic by what they saw.

Gloria Guthrie said, “Eric gets hotter every season!” Katherine Lara posted, “OMG! This is the best show on television. What are they going to do with he body in the basement?” Jessica accidentally killed a man she wanted to feed on. She ended up putting his body under the house, which caused Sookie to ask, “What is that smell?”

This week’s episode is highly anticipated and fans can join our fun in discussing it at Facebook | True Blood.  For a peek at Sunday’s episode go to