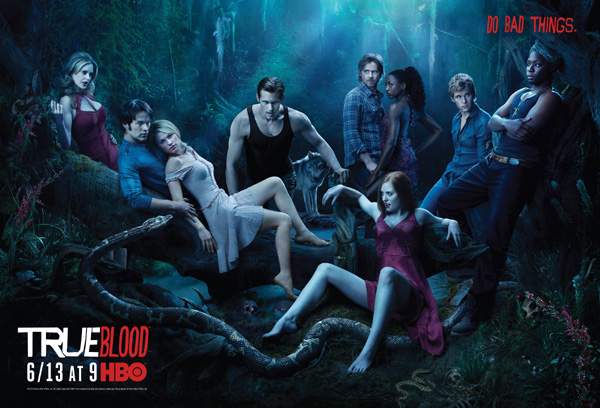 SANTA MONICA—The episode titled “9 Crimes” was written by Kate Barnow and Elizabeth Finch. The most exciting episode so far of season three was also directed by David Petrarca. The hit that has become a guilty pleasure and nightmarish dream come true for fans of the drama that reminds us of “Twin Peaks” is about to explode and morph into giving us new creatures and unbelievable storylines.

On Sunday night, Sookie (Anna Paquin) joined Alcide (Joe Manganiello) at a raucous engagement party for Debbie Pelt (Brit Morgan), his former fiancÃ©e. The shocking scene ended with the King of Mississippi showing up at the were-bar, offering his blood to an almost hypnotized crowd of werewolves. Alcide was unable to stop himself from shifting, along with the other dozens of men and women in the bar, into werewolves, leaving Sookie running for her life. Eric (Alexander SkarsgÃ¥rd) was given a deadline to locate Bill (Stephen Moyer) when the Magister demanded to see the vampire who is selling vampire blood, or he will kill Pam, who is an undead made by Eric. Pam lied that Bill was the vampire who is selling “V,” not divulging that it’s actually the Queen of Louisiana who is breaking the sacred vampire law.

Andy (Chris Bauer) got a promotion to sheriff, which didn’t really sink in to Jason (Ryan Kwanten) who feels Andy’s becoming the town hero after shooting and killing Eggs. Both Andy and Jason hold the secret that it was actually Jason who did the deed. Franklin (James Frain) took Tara (Rutina Wesley) on a road trip, and they ended up at the mansion that belongs to the King of Mississippi. All of this season’s storylines seem to be converging in Mississippi this year, with Bon Temps taking a back seat for now to the real danger ahead.

Bill procured dinner for Russell (Denis O’Hare) and Lorena (Mariana Klaveno), leaving a stripper bleeding and dying in the back of the King’s limousine. Fans are loving the blood and gore this show is known for.

Look out for more shocking storylines on the upcoming episode which finds Tara in more danger than she’s ever been, Sookie the object of yet another man’s obsession and an heirloom reminds Eric of his past and his ongoing thirst for vengeance.