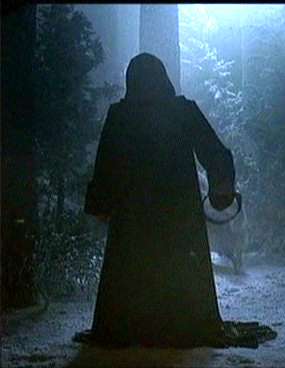 HOLLYWOOD—On Sunday night, “True Blood” was titled, “I Got a Right to Sing the Blues.” However, fans did not have the blues after watching the exciting episode. This was the season’s best episode so far. No one wanted to answer their phones or be preoccupied watching this episode, because the show moved at the speed of light, and we don’t always have Alan Ball writing a full episode. Truebies want more of his work for season three. When Alan is writing, if you miss a moment, you can miss a lot.

Sookie found herself in danger from the very beginning of the episode. The King of Mississippi kidnapped her and brought her to his mansion, where Eric refused to help Sookie and turned his back on her cries for help. His Majesty the King was able to get details about her secrets out of her, but Bill’s decision to protect Sookie led to his maker, Lorena, draining him of his blood and then allowing werewolves to feed on him.

Tara made a great escape from the clutches of Franklin by bashing in his head and leaving him for dead. Fans know, however, that it’s very hard to kill a vampire, so look for Franklin to return. It was hilarious when she ran into the white wolf out in the woods that turned into Alcide, who then asked the stunned Tara to help him find Sookie. Tara had one question for Alcide after escaping from the psychotic Franklin: “Do you have a car?”

Jesus could not handle the news that Lafayette is selling V, so he left soon after Lafayette’s fight with another drug dealer. Jason’s romance also hit a snag. When Jason went to visit Crystal, he found her fiancÃ© at Crystal’s home. Jason was crestfallen, but then proceeded to harass the local high school football star. Nicole Stuckey, who is a Truebie and Ryan Kwanten’s biggest fan, tells Canyon News, “I felt Jason’s heart break, but it doesn’t appear like he is going to give up so easily. I think he should, because she is only going to get him in trouble.”

“With the evidence mounting that Sookie is much more than a mere telepath, I’m excited to imagine what we may find lurking inside her brother, Jason!”Rene Thurston, an avid reader and self-proclaimed “Truebie,” tells Canyon news. “Sookie has changed immensely since the first episode, growing from a young, innocent girl into a woman who is willing to do anything, including kill, for the love and well being of those she loves, especially Bill.”

Nicole was equally concerned about the plight of Bill Compton. “I really thought Bill was going to die and am so happy he did not,” said Nicole. Bill was not the only one Lorena wanted dead. She attacked Sookie at the end of the hour. The dark figure Eric is hunting is right in his crosshairs, and viewers are just catching on to the identity of the man in black.  Bobby Head, a genuine “True Blood” fan, tells Canyon News, “Alan Ball has turned the third season into a thrilling roller coaster ride of emotional excitement. This is, by far, the best season ever.”