WESTWOOD—On October 17, approximately 400 vehicles lined up with police escorts at 10:45 a.m. in Woodley Park in Encino before traveling with the caravan on the 405 Freeway for close to six miles to the Westwood area near UCLA. 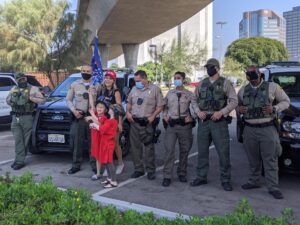 Participants parked their vehicles alongside the streets and parking lots and walked to the Federal Building, where over 1,000 people attended.

Supporters of President Donald Trump were seen thanking officers. The Los Angeles Police Department and the Los Angeles Sheriff’s Department assisted by blocking off the streets enabling the drivers to stay together in the caravan.  The crowd dispersed around 12:30 p.m.

Errol Flynn, who is a first-generation Jamaican-born immigrant that is running as a Republican for Congress in California’s 37th District against the incumbent, Karen Bass spoke publicly on why he is voting for President Trump. 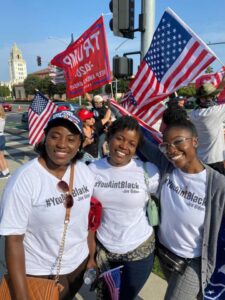 On Sunday, October 18, 200 enthusiasts waited to greet President Trump as he arrived in Santa Ana.

According to reports, thousands of Trump supporters lined the streets to welcome the POTUS to Newport Beach, where he was holding a fundraiser.

The event was initially planned for October 6 but was canceled due to the Commander-in-Chief contracting the coronavirus. The fundraiser was held at Palmer Luckey’s Newport Beach Estate where President Trump attended a round table discussion with his supporters in the area.

Admission tickets for the fundraiser ranged from $2,800 for individuals up to $150,000 for couples who wished to be photographed with the POTUS.