Washington, DC─President Trump ordered federal flags to fly at half-staff in the United States on Saturday, July 18 in honor of Civil Rights icon and Congressman John Lewis, who died on Friday, July 17 at the age of 80. 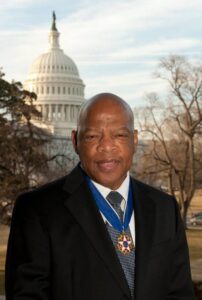 The order was issued on Saturday morning, requiring flags at the White House, all federal buildings, military bases, naval vessels, embassies, and federal offices around the world to fly at half-staff “as a remark of respect for the memory and longstanding public service of Representative John Lewis.”

“Saddened to hear the news of civil rights hero John Lewis passing. Melania and I send our prayers to he and his family,” tweeted President Trump.

Lewis, a member of the Democratic Party, had served for 17 terms in the United States House of Representatives for the 5th congressional district of Georgia from 1987 until his death in 2020. He was the dean of the Georgia congressional delegation.

In 1963, Lewis was elected to serve as the Chairman of the Student Nonviolent Coordinating Committee (SNCC) at the age of 23 and was also named one of the “Big Six” leaders who organized the March on Washington. Other leaders of the “Big Six” include Martin Luther King Jr., Whitney Young, A. Philip Randolph, James Farmer, and Roy Wilkins.

Throughout his life, Lewis had received many honorary degrees and awards such as the Four Freedoms Award for the Freedom of Speech and Golden Plate Award of the American Academy of Achievement. In 2011, Lewis was awarded the Presidential Medal of Freedom by former President Barack Obama.