A Trump rally on wheels took place on Saturday while POTUS and FLOTUS were recovering from coronavirus at Walter Reed Memorial Hospital. The event started in Prayer for the President and Melania Trump.

According to their website the National Drag the Interstate is “a grassroots assemblage of patriots from across the United States who are tired of seeing our country attacked and slandered by violent seditious radicals, and we are ready to take it back.”

The site also gave a brief description of what they do.

“We decorate our cars with signage and flags and organize into peaceful and spiriting roving rallies that blanket the country with hope, a spirit of patriotism, and a reminder that we are more united than divided. Our roving rallies are a fun and positive reminder that traditional American values matter. Silence is out. It’s time to take a stand and take our country back.” 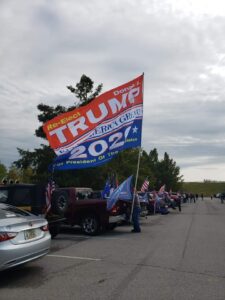 There were many videos showing participants gathering in parking lots and taking to the interstate with as many flags as their vehicle would carry.

Canyon News reached out to one of the Missouri participants, Tama Collins-Carlock, who made the following statement.

“I would say there were close to 500-600 people and 200 vehicles. No altercations at all. Everything went amazing.” This chapter advertises themselves as Mo Maga Drag the Interstate. Missouri had at least 8 rally-drag events.