UNITED STATES—Supporters of President Donald Trump came out holding both American flags and Trump flags chanting, “Four More Years” on Friday, September 18. News reports indicated that supporters of the President were blocking the way into the polling station for voters. No violence or demonstrations were reported.  Voters were able to exercise their right to vote. 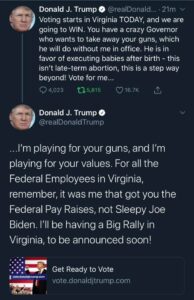 President Trump tweeted about the start of Virginia’s early voting, reminding people to get out and “Vote for Me.”

According to reports, Virginia Governor Ralph Northam chose early voting to lessen the crowds. Approximately 400 people were in line to cast their ballot.

Governor Northam urges all Virginians on his website to, “Make a voting plan.”  In Virginia, voters have the opportunity to vote early, in-person or by mail. There are drop-off locations for ballots where citizens may drop their votes off at their local registrar’s office or one of the drop-off locations.  Northam publicly announced that he cast his own vote on, September 18.

Posted by Wedapeople on Saturday, September 19, 2020

Appearing on the ballot is the initiative for the Redistricting Commission Amendment, where a  “yes” vote supports transferring the power to draw the state’s congressional and legislative districts from the state legislature to a redistricting commission composed of state legislators and citizens.

A “no” vote opposes transferring the power to draw the state’s congressional and legislative districts to a redistricting commission, keeping the state legislature responsible for redistricting.