UNITED STATES−On Wednesday, January 22, Tulsi Gabbard filed a complaint in U.S. District Court in New York against Hillary Clinton for defamation of character seeking $50 million in damages for the purpose “to Clinton and other political elites accountable,” the complaint reads.

Clinton indicated during a podcast appearance on Campaign HQ with David Ploufe, in October 2019, that Gabbard was some sort of a Russian plant. 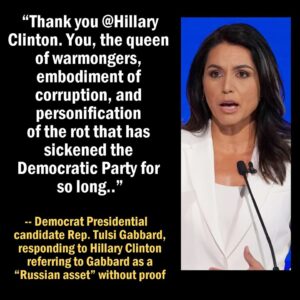 “She is a favorite of the Russians. They have a bunch of sites and bots and other ways of supporting her so far. And that’s assuming Jill Stein will give it up, which she might not because she is also a Russian asset. Yeah, she’s a Russian asset,” said Clinton.

“Tulsi Gabbard is running for President of the United States, a position Clinton has long coveted, but has not been able to attain. In October 2019—whether out of personal animus, political enmity, or fear of real change within a political party Clinton and her allies have long dominated—Clinton lied about her perceived rival Tulsi Gabbard. She did so publicly, unambiguously, and with obvious malicious intent. Tulsi has been harmed by Clinton’s lies—and American democracy has suffered as well. With this action, Tulsi seeks to hold Clinton, and the political elites who enable her, accountable for distorting the truth in the middle of a critical Presidential election,” the suit reads.

In the complaint, Gabbard noted reasons for the response as a direct result of her not endorsing Clinton in 2016, over Bernie Sanders. She also responded to Clinton’s remarks in video footage, where she stated:

“I will not stand quietly by as Hillary Clinton or anyone else tries to smear my character.”

On the same day that this lawsuit was filed, Clinton made negative remarks against 2020 presidential candidate, Bernie Sanders.

“Nobody likes him, nobody wants to work with him, he got nothing done. He was a career politician,” Clinton said. “It’s all just bologna and I feel bad that people got sucked into it.”