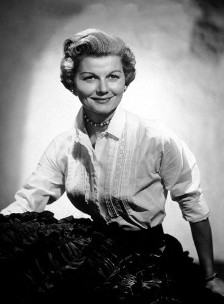 SANTA MONICA—TV Mom Barbara Billingsley, who is best known for her role as June Cleaver in the 1950s era television series “Leave It To Beaver,” died at her Santa Monica home on Saturday, October 16, at the age of 94. The last time fans saw Billingsley, she appeared on ABC’s “Good Morning America” alongside her “Beaver” cast mates Jerry Mathers and Tony Dow in 2007, commemorating the 50th anniversary of the show’s debut. Mathers and Dow played her sons Beaver and Wally on the series.

Billingsley also made appearances on “The Abbott and Costello Show,” “The Long Wolf,” “Schlitz Playhouse,” “The Loretta Young Show,” “The Danny Thomas Show,” “Panic,” “The F.B.I.,” “Silver Spoons,” “The Love Boat,” “The New Mike Hammer,” “Parker Lewis Can’t Lose,” “Murphy Brown,” “Muppet Babies,” “Empty Nest” and many other television series. Billingsley even brought her famous character, with a pearl necklace, to the “Roseanne Show” in the early 1990s.

Barbara was always considered America’s mom. The pearl-necklace-wearing-mom from the ’50s leaves a legacy of family-friendly TV to a whole new generation of youngsters, thanks to TV Land and other networks and stations around the world that still air the timeless classic “Leave It To Beaver.” Jerry Mathers, who starred in the title role as Beaver, said in part, “I am deeply saddened by the loss of my dear friend and lifetime mentor Barbara Billingsley. She will live in the hearts of her fans as a wonderful actress and be remembered by her friends as a gracious lady. She will be deeply missed by all of her family, friends, fans and most especially by me.”

Canyon News attempted to contact Tony Dow, but the star was in Paris, France this week for an art show of his sculpture work at the famed Louvre Museum. Beverly Washburn, who was one of the most prolific child stars in history, worked with Billingsley on “Professional Father,” a hit television show in the ”˜50s, tells Canyon News, “I am deeply saddened. I was in New York last weekend, when I heard the news. She was truly everyone’s favorite mom, and most definitely mine. She was one of the sweetest, loveliest ladies I’ve ever known. She will be missed by so many. I feel so honored to have been able to call her ”˜mom’ on ”˜Professional Father’ so many years ago. She will forever be in my heart.” Washburn also guest-starred on “Leave It To Beaver” as one of Wally’s suitors.

A family spokeswoman, Judy Twersky said Billingsley died of polymyalgia, a rheumatoid disease, at her home in Santa Monica. The star is survived by two sons, Drew Billingsley of Granada Hills, Calif. and Glenn Billingsley of Phillips Ranch, Calif. Both sons are from Miss Billingsley’s first marriage. Funeral services were private.