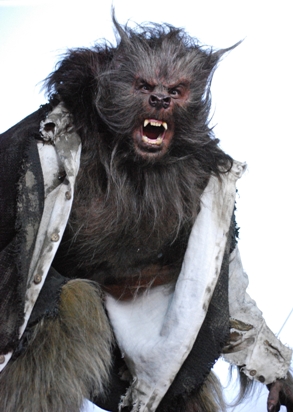 BEVERLY HILLS—This week in Hollywoodland, I caught up with handsome actor Douglas Tait, who often portrays monsters on the big screen. Douglas shares exclusive news with Canyon News about some upcoming projects, including one with me. Jade Harlow, who stars in “The Bay” series, spoke exclusively with us about her pivotal storyline on the latest webisode, which left viewers wondering if her character is dead or alive.

This week ‘two and a half men’ has different meanings. Certainly the most popular meaning is the title of Charlie Sheen’s number-one rated CBS series.  However, this week we are paying homage to Douglas Tait, the half man he plays in the recent AT&T commercial and myself. Douglas offered me something wonderful. So we comprise ‘two and a half men’ this week.

The handsome and talented actor and brilliantly talented filmmaker tells us about the recent commercial, which has gone viral in movie theaters around America.

Douglas Tait as the Werewolf in AT&T commercial

There is very little this handsome star does that doesn’t become popular. When asked about his makeup session for the Wolfman look, Douglas laughed, then commented, “It took a couple of hours to be made up for the role. I had two amazing makeup artists working on me at the same time, Barney Burman and Steve Prouty.” Both men are masters of movie makeup wizardry, and concur on the actor’s affable and professional manner. When asked if he’s currently doing any movie projects, Douglas stated, “I am not currently on a film project, but I am leaving town in a week for a movie event in Germany. I have never been to Germany so it should be fun.”

The event is a big deal in Europe, and German fans can learn more at movie-event.de/.

Douglas raves about working with partners Chris Cashman and Isabel Cueva. “We sure hope to be doing something big soon! We have several projects that we are working on and would like to film. We have to focus on one and make it happen. We all work well together as a team,” said the actor.

Exclusive news for our readers— I was offered a role opposite the talented actor. “Chris [Cashman] and I have a film we are currently working on called ‘The Chauffeur.’ The script is almost complete and Tommy [Garrett] has a nice role in it. I don’t want to say too much, but Tommy is going to be great in the part!” said Douglas. Then on the most pressing news in Hollywood, Douglas agreed to make his Oscar predictions. “My favorite film of the year is ”˜The Kings Speech,’ and I think Colin Firth will win for best actor, and Christian Bale will win for best supporting actor for ”˜The Fighter.’”

There were so many snubs this year in the Oscar race, with talented Leonardo DiCaprio being the most shocking omission for “Inception.” However, the gracious superstar kept mum about the omission and publicly supports the current Oscar Leading men and women. Perhaps this is what makes Leo such a great person and truly a gifted actor.

Leave it to network chief Oprah Winfrey to knock “Two And A Half Men” star Charlie Sheen off the headlines of major newspapers early in the week around the U.S. On Monday, Oprah revealed to a stunned TV audience that she has a half sister who her mother gave up for adoption over 50 years ago. Oprah spoke glowingly of her new sibling and hit critics back who stated that she revealed the secret on air for ratings. Oprah stated in part, “If I wanted a ratings boost, I would have waited until the February Sweeps.”

Then Sheen took back headlines again on Thursday, as he was taken to Cedars Sinai hospital for severe abdominal pains. Ex-wife Denise Richards and his parents were by his side immediately after the incident.

Speaking of February Sweeps. “The Bay” had their best and most dramatic episode ever last week when a beloved character (Lianna), played by Jade Harlow, seems to have committed suicide. Viewers of the hit Internet series are desperately hoping Harlow’s character will be saved. We spoke exclusively with the actress about the groundbreaking storyline on the recent webisode. “I think overall as people, we have those moments of tragedy and devastation that happen to all of us, at one point or another in our lives. In order to get ”˜through it’ we suppress that urge to flirt with the idea of taking the easy way out. I know If I’m being honest, I have. So, for me, I allowed myself to fully absorb that rock bottom/no way out mentality. Almost romanticized it.”

Viewers of “The Bay” are anxiously awaiting what creator, producer and writer Gregori Martin has in mind. See what happens next at Thebaytheseries.com.

Kyle Lowder, who has played Rick Forrester on “The Bold and the Beautiful” for several years, was released from his contract this week. The handsome star who shot to fame on the NBC soap “Days of Our Lives” as Brady will remain on the show as Rick Forrester on “B&B.” The talented actor has been featured in our Gold Standard many times. The show’s Emmy winning executive producer and head writer called Kyle and gave him the news personally. Bell also spoke with Canyon News. “Kyle Lowder’s four year run as Rick Forrester on ”˜The Bold and The Beautiful’ has been a tremendous success. Kyle is a superb actor and a fine gentleman. Kyle will continue on with the show on a recurring basis,”  said Bradley P. Bell

Have a great week, and see you next week! XOXO

Douglas Tait and Tait as Wolfman Photographs are Courtesy Douglas Tait’s private collection and Tommy Lightfoot Garrett and Cody by Irene Keller Photography
DISCLAIMER: This article was a contribution made by an outside agency or person. The content has not been verified by Canyon News. Please exercise your due diligence prior to relying on this article for factual information. Canyon News is not responsible for the views, words, and opinions of contributors.