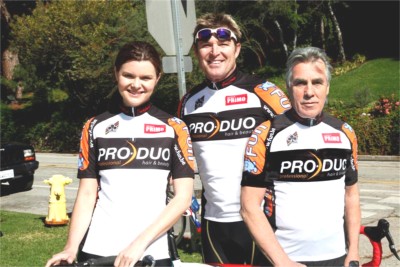 HOLLYWOOD —“The Bold and the Beautiful” stars Winsor Harmon, who plays Thorne, and Heather Tom, who plays Katie, will be going to the region of Provence, France, in July to cycle to the top of Mont Ventoux. Both are avid cyclists, but this challenge, well known as being the hardest stage of the Tour de France, might be their biggest challenge yet. Both have participated in many triathlons, and Heather recently took first place in the Female Celebrity category at the 2010 Nautica South Beach Triathlon.

Belgian Tour de France winner, Lucien Van Impe (1976) will be coaching Winsor for the climb that will take place on Sunday, July 4. Winsor and Heather are excited about their upcoming trip to France.

Fans will have the opportunity to meet both Winsor and Heather while they are in France this summer. On Saturday, July 3, there is a women’s only climb, at the first edition of The Queen of the Ventoux. That afternoon, fans are invited to attend an event with Winsor and Heather. All are welcome to participate in the event. For information on how to get tickets to the fan event and/or Queen of the Ventoux climb, and two nights full board in the official hotel, you can call +32 13 52 28 18, or e-mail biking@detoerist.be. The price is 180 Euro.

On August 30, 2009, “The Bold and the Beautiful” won the Emmy for Outstanding Drama Series at the 36th Annual Daytime Entertainment EmmyÂ® Awards. On June 11, 2009, “B&B” was the recipient of the Golden Nymph Award at the International TV Audience Awards in the “Telenovela/Soap Opera” category at the Monte Carlo Television Festival awards ceremony, confirming that in its genre, with an estimated 35 million daily viewers, it remains the most watched series in the world.
DISCLAIMER: This article was a contribution made by an outside agency or person. The content has not been verified by Canyon News. Please exercise your due diligence prior to relying on this article for factual information. Canyon News is not responsible for the views, words, and opinions of contributors.