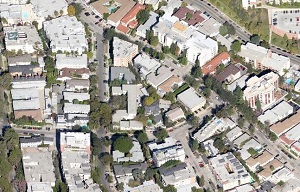 WESTWOOD — Two robberies occurred in the same vicinity near the UCLA campus on February 10 and February 15.

Both robberies occurred on Ophir Drive within a few blocks of each other, according to two news releases from UCLA Police. The first happened around 2:00 a.m. when a male victim was walking by the intersection of Ophir Drive and Landfair Avenue when he was approached by one of three suspects. This robber demanded that the victim hand over his iPhone, but when the victim refused, he was assaulted by the suspect, who took his wallet following the attack. The second and third suspects, who played the part of lookouts, fled with the first robber heading eastbound on Ophir Drive. The victim reported the incident to police on the following day.

The first suspect is described as a black male between 21 and 24-years-old with a thin build and a height of around 6 foot 2 inches tall. He was wearing a black, plain hooded sweatshirt and navy blue jeans. The second suspect is said to be a white male between 20 and 23 years of age with a thin build as well, a short brown comb-over, brown eyes and facial hair. He was reportedly wearing a red hooded sweatshirt with a white logo, blue jeans and dark-colored shoes.

The third suspect is a black male around 21 to 24-years-old, medium build with either an afro cut or dreadlocks, “scruffy”Â side burns and short facial hair with a mustache. His clothing was described as a dark jacket and pants.

The second robbery took place on February 15 around 1:00 a.m. when a male victim was attacked by two suspects as he headed along Ophir Drive by Midvale Avenue. The victim was reportedly punched and hit multiple times until the robbers proceeded to take his shoes before fleeing down Ophir Drive towards Glenrock Avenue. Despite the attack, the victim walked away with minor injuries to the head and face, according to UCLA Police.

Both suspects are said to be black males between 18 and 20-years-old. One suspect stood at a height of 5 foot 10 inches and between 175 and 185 pounds. He was wearing a white beanie, gray hooded sweater and jeans. The other suspect had an athletic build and was 6 foot tall with possible dreadlocks. His is believed to have a black high top and was wearing high ankle shoes.