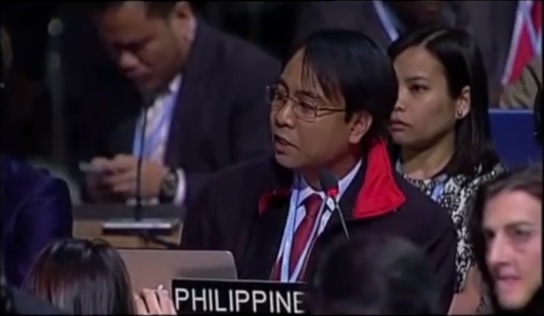 PHILIPPINES—On Friday, November 8, Super typhoon Haiyan devastated the Philippines when it hit land, sustaining winds up to 195 mph. The survivors of typhoon Haiyan, or as it’s called in the Philippines, typhoon Yolanda, are struggling to piece together their lives after the destruction the typhoon left in its wake. The typhoon is estimated to have claimed the lives of at least 2,000 people; making it one of the most powerful typhoons to make landfall.

On November 2, typhoon Haiyan started as a tropical storm that originated in Micronesia; but as the storm began to pick up speed on November 4, it was named tropical storm Haiyan/Yolanda. By November 5, the storm reached typhoon intensity. On November 6, warnings and advisement to evacuate were issued. Once the storm breached, it took two days to pass over thePhilippines, the horrific aftermath being visible on Sunday, November 10. According to the National Oceanic and Atmospheric Administration (NOAA), the difference between a typhoon, hurricane and a cyclone is their location. In the Atlantic and Northeast Pacific ocean region, these powerful storms are called hurricanes; in the Indian and South Pacific Ocean they are called cyclones; and finally in the Northwest Pacific they are dubbed typhoons. A tropical storm starts off with winds speeds reaching  at least 17 m/s, and become a class 1 typhoon when wind speeds surpass 33 m/s. Typhoon Haiyan reached wind speeds of as high as 230 m/s; winds of 195 m/s was sustained for a solid minute. Images from space show the tropical storm growing in size and reaching its full-force as it made landfall on thePhilippines, blocking it from view.

The typhoon hit the city of Tacloban the hardest; footage shows entire ships that came hurtling into the town, colliding into houses. Survivors recounted their stories to climb to safety as high speeds of water and other debris entered their homes. According to an NPR report on the Haiyan incident, they quote Neilson-Gammon describing strong tropical storms as “[imagining] instead of having just one car, imagine millions of raindrops and debris moving at the same speed past you, and you’re trying to stand in the middle of it.”

Many survivors are left homeless,  without food, water and electricity. The death toll is so high; there are health concerns of the decaying bodies affecting the survivors. The survivors are utilizing wells to obtain water, but are unsure if the water they are ingesting has been contaminated. In a CNN interview, a survivor indicated the deplorable conditions they are currently living in saying, “Right now, we are worried we don’t have enough water” “Even though we are not sure if the water is clean or safe. We still drink from it because we need to survive.”

Worldwide support efforts are being conducted to ease the suffering of the storm victims in the Philippines. On Twitter, many users report sending clothes in an attempt to help in addition, the U.S. army and other factions are also sending aid. The storm has diffused since it struck the Philippines, returning to tropical storm status as it passed through Vietnam on its way toChina early Monday morning.

On Monday afternoon, a UN Climate Talk was held in Warsaw, Poland; all of the attention was on Philippines Climate Change Representative, Yeb Sano who made a speech encouraging environmental action. Sano, who has family in the Philippines struggled to keep his voice even as he recounted his own fears of trying to contact his family- despite the lack of electricity. The only family member of his that he knew survived was his brother who managed to contact him after the storm left.

Sano reached out to the UN saying, “I speak for my delegation, but I speak for the countless people who will no longer be able to speak for themselves- after perishing from the storm. I speak also for those who have been orphaned by the storm. I speak for the people now rising this time to save survivors and to alleviate the suffering of the people affected” We can take drastic action now to ensure that we prevent the future where super typhoons become a way of life.  Can we ever attain the ultimate objective of the convention; which is to prevent dangerous and trophogenic interference with a climate system? By failing to meet the objective of the convention, we may have ratified our own doom. We have to confront the issue of loss and damage. Loss and damage is a reality today across the globe. We cannot solve climate change when we seek to spew more emissions.”

Sano later announced that he would be going on a fast, in solidarity with his brother and other survivors who are currently without, for the remainder of the Conference of the Parties (COP) until a plan to help the climate was in sight. He finished his speech saying, “This process has been called a farce – It has been called saving tomorrow today. We can fix this. We can stop this madness.”