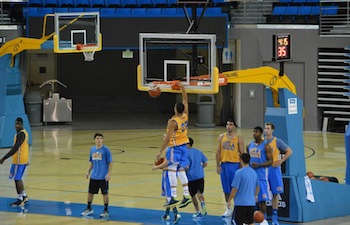 WESTWOOD—Hundreds of UCLA basketball fans came to watch this year’s team exercise with their new head coach, Steve Alford, during an open practice on October 20.

The open practice began around 3:30 p.m., after the team participated in the sixth annual “Dribble for the Cure” charity event for pediatric cancer research earlier in the day, a UCLA Athletics press release stated.

Alex Timiraos, the UCLA Sports Information Director for Men’s Basketball, told the Canyon News in an email that approximately 1,000 fans attended Sunday’s open practice. All 16 players on the roster came dressed for practice.

First-year Coach Steve Alford trained freshmen Zack LaVine, Isaac Hamilton, Noah Allen, and son Bryce Alford alongside returning teammates like the Wear brothers, Tony Parker and Jordan Adams at the open preseason practice. Newcomer Wanaah Bail, who underwent knee surgery on June 28, is undergoing rehab for his left knee and has not yet been cleared for practice, Timiraos stated.

According to the Bruins official website, Coach Alford is UCLA’s 13th head coach in men’s basketball history and has been coaching college basketball for 22 seasons. With an impressive 463-235 record, Alford leads among head coaches aged 48 or younger with the most recorded NCAA victories in the nation.

“As a coaching staff, we’re all extremely pleased at how hard our guys have been working since preseason practice began a couple weeks ago,” Alford said in a UCLA athletics press release on October 8.

“Our team is excited to be back on the court and is committed to getting better each and every day. By opening practice, we have a great opportunity to share this work ethic with our loyal fans and alumni while giving them a behind-the-scenes look at just what it takes to be a member of the UCLA men’s basketball team.”

The UCLA men’s basketball team will play two exhibition games in Pauley Pavilion against Cal State San Bernardino on October 30 and Cal State San Marcos on November 4. The regular season begins at home against Drexel on Friday, November 8 at 9 p.m.