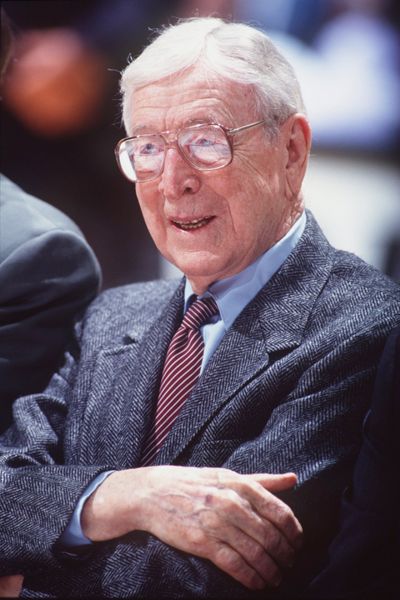 LOS ANGELES—Former UCLA basketball coach, John Wooden passed away on Friday, June 4 at the age of 99. Wooden was hospitalized at the Ronald Reagan UCLA Medical Center on May 26 and remained there until his death.

Shortly after his death, Wooden’s son and daughter, Jim and Nan Wooden released a statement saying in part, “He has been, and always will be, the guiding light for our family. The love, guidance and support he has given us will never be forgotten. Our peace of mind at this time is knowing that he has gone to be with our mother, whom he has continued to love and cherish.”

John Wooden is known for building one of the greatest dynasties at UCLA and in all of sports. He coached the UCLA Bruins to ten NCAA Men’s Basketball Championships, including seven consecutive wins from 1967-1973, earning him the nickname the “Wizard of Westwood.” Over his 12 year coaching career at UCLA, Wooden won 620 games, including an all-time winning stretch of 88 games. UCLA also won 38 straight NCAA Tournament games between 1964 and 1974. Under his coaching, UCLA only lost two home games on their court at Pauley Pavilion. Wooden retired after the 1975 basketball season, concluding his 27 years of coaching basketball. Before becoming head coach at UCLA, he coached two years at Dayton High School in Kentucky, nine years at South Bend Central High School in Indiana, and then two years at what is now Indiana State University.

NBA legend, Kareem Abdul-Jabbar, who John Wooden coached in the late 1960s, released a statement through UCLA, admiring Wooden. “He set quite an example. He was more like a parent than a coach. He really was a very selfless and giving human being, but he was a disciplinarian. We learned all about those aspects of life that most kids want to skip over. He wouldn’t let us do that,” stated Abdul-Jabbar.

Wooden was the first person, and is only one of two, to be inducted into the Basketball Hall of Fame as both a coach and player. As a player on the Purdue University basketball team, he helped lead the Boilermakers to the National Championships in 1932. While at Purdue, Wooden was named All-American three times, All-Big Ten, and All-Midwestern.

He is also very well known for his “Pyramid of Success,” which he started developing in the 1930s. Wooden would talk about success saying, “Success is a peace of mind which is a direct result of self-satisfaction in knowing you made the effort to become the best that you are capable of becoming.” His five level pyramid is a guide for anyone to get to the highest level, competitive greatness, which is performing at one’s best ability when one’s best is required. Wooden went further into his “Pyramid of Success” in his book Wooden on Leadership.

John Wooden is no doubt a man who will be greatly missed. His family thanks everyone for their support and requests everyone respect their privacy. There will be a public memorial service for Coach Wooden, which will be announced at a later date.