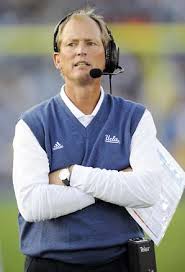 WESTWOOD—UCLA head football coach Rick Neuheisel announced the dismissal of three incoming freshman football players. The players, identified as Paul Richardson, Shaquille Richardson and Joshua Shirley, were recently charged with felony theft while taking summer classes at the university. University police arrested them June 23 after responding to a call about a stolen backpack from a personal locker near the dining hall, a university press release stated. The police estimated the backpack’s contents at $1,200.

“The three young men know they made a terrible mistake,” Neuheisel said in a statement released by the university. “We expect our players to behave a certain way and there are consequences when they don’t. Paul, Shaquille and Josh are paying a steep price for their lapse in judgment. They will not be allowed to enroll in school this fall and will not have the opportunity to begin their UCLA academic and athletic careers.”

Neuheisel said the possibility of them returning to the university in January will be decided later, adding that the decision “will be based on several factors, including their behavior.”

According to the press release, the Office of the Dean of Students may enforce additional disciplinary action at a later date.