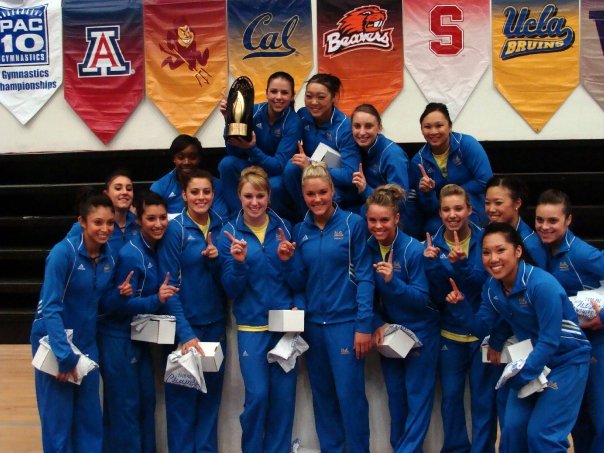 WESTWOOD —On Saturday there will be a lot happening in the sports world. The NFL begins its divisional playoffs, highlighted by a rematch of last Sunday’s game with the Dallas Cowboys playing the Philadelphia Eagles once again in the new Cowboy Stadium, and college basketball will be rocking stadiums all over the country. All those events are all fine and dandy, but at about 4 p.m. in Pauley Pavilion, there will be another event going on that is not high on everyone’s list but most certainly should be. This amazing spectacle I’ve been referring to is the opening meet of the season for the UCLA gymnastics team.

Yes, I did say gymnastics and I know that it seems almost criminal to think of watching a gymnastics meet instead of sitting in front of a 50-inch plasma screen with surround sound and such a clear picture that it looks like I’m sitting on the field—I think I should stop I’m beginning to reconsider—but I promise you there is nothing more spectacular than watching all these young women doing almost death-defying stunts while suspended in the air. I mean a touchdown pass is a thing of beauty, but seeing a gymnast land an incredibly insane dismount to end her routine is somewhere on the same plain.

After barely missing the final cut for the NCAA Championship last year, this year the Bruins are ready to get back to work. They came into the season ranked 5th in the nation and return the entire squad from last year, with the exception of one person and five new freshmen. This year’s team is full of All-Americans and All-Pac-10 players, and lead by five-time All-American Anna Li. Li is the only senior on the team and is by far the most consistent and best all-around gymnast. On any given day she is capable of hitting 9.9 on the uneven bars—where she is one of the nation’s best—the vault, the balance beam and in the floor routine. Last year, Li was limited to the uneven bars because of an injury, and now that she is completely healthy the Bruins like their chances at making a run at the National Championship.

Other key players are redshirt junior Brittani McCullough, who was finally healthy last season after suffering season-ending injuries in 2007 and 2008. McCullough was able to finish all her routines last season and earned All-American honors with her consistent performance on the floor. “I’m very excited about the beginning of our season! We are looking very good and we are ready to go out and compete well,” said Brittani McCullough.

Freshmen Vanessa Zamarripa and Elyse Hopfner-Hibbs burst on to the scene last season, and were the two main players in a freshman class that accounted for about 50 percent of the Bruins routines last season. Zamarripa was nothing short of phenomenal in the NCAA Championships, finishing 3rd in the all-around standing while collecting five All-American honors. Hopfner-Hibbs had similar success last year, finishing as the Pac-10 Freshman of the Year and earning four All-American honors.

Of course much of the Bruins success can also be contributed to the steady performances of Marci Bernholtz, Allison Taylor, Mizuki Sato, Niki Tom and Talia Kushynski. These five juniors were the core of the team last year. Niki Tom was a former walk-on, but has easily become one of the team’s most dependable performers, which showed last year when she made the All-American second team in floor and was first team All-Pac-10 in beam. Sato was also an All-Pac-10 performer last year.

As you can see, the Bruins return a lot of firepower this year so it is well worth it to miss a NFL Playoff game to watch these guys perform; I assure you that during that hour or two, you won’t even remember there is another sport other than gymnastics. They’re going up against the number two team in the nation, Utah—who by the way was the team who edged them out of the final six last year in the NCAA Championships—and  to sweeten the deal, they brought in Olympic Gold medalist Nastia Liukin to sign autographs after the meet, so how could you possibly say no. I mean there is a reason God created ESPN, you can just watch those Cowboy highlights later, but if you miss the meet on Saturday, you miss a chance to see some of the most talented young women in the country put on a show that you need to be there to appreciate.