WESTWOOD—On June 5, UCLA Professor Gordon Klein was put on leave after an email exchange with a student who requested that the final exam requirement be amended due to his grief following the death of George Floyd, 46, who was killed in Minneapolis, Minnesota on May 25.

Gordon Klein of UCLA Anderson School of Management wrote the following in response to the request:

“Thanks for your suggestion in your email below that I give black students special treatment, given the tragedy in Minnesota. Do you know the names of the classmates that are black? How can I identify them since we’ve been having online classes only? Are there any students that may be of mixed parentage, such as half black-half Asian? What do you suggest I do with respect to them? A full concession or just half? Also, do you have any idea if any students are from Minneapolis? I assume that they probably are especially devastated as well. I am thinking that a white student from there might be possibly even more devastated by this, especially because some might think that they’re racist even if they are not. My TA is from Minneapolis, so if you don’t know, I can probably ask her. Can you guide me on how you think I should achieve a “no-harm” outcome since our sole course grade is from a final exam only? One last thing strikes me: Remember that MLK famously said that people should not be evaluated based on the “color of their skin.” Do you think that your request would run afoul of MLK’s admonition? Thanks, G. Klein.”

The initial email request by the student to Klein was not posted.

UCLA student, Preet Bains posted to the page on June 5 an email blast from the Dean’s Office that confirmed Klein’s leave apologizing for any added stress during this time in the midst of COVID 19 and civil uprising over racial injustice.

Bains said, “As of today, Klein has been put on leave from UCLA so I would like to thank everyone for their support and please keep sharing to ensure he is completely dismissed from his position. The fight to hold him accountable is not yet over.” 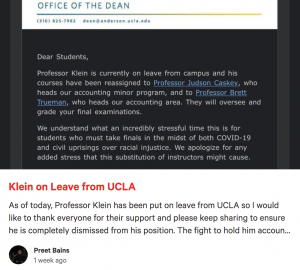 An additional petition page was created on change.org to counter this call to action. The page is titled, “Justice for UCLA Professor Gordon Klein #TitleVI” encouraging people to sign it stating, that the lecturer was “placed on leave after defending equality” and stating “we demand an apology.” This petition currently has 56,440 signatures.

A UCLA alumni student posted to a student Facebook page that currently has 20,387 members that he took two of Klein’s classes during his time there and said, “he was a terrific, caring educator.” The student added:

“Hard to believe such bizarre news where an educator is punished for upholding a basic academic standard. We all demand justice for George Floyd and other victims. And this should only encourage, rather than scaring us and the school from doing the right thing.”

Some student responses to his post were the following:

“He chose to write an email in an extremely sarcastic and humiliating manner.”

“Suspension is due to an inappropriate email response with racially insensitive undertones.”

“I think asking a professor to show special attention to students with specific background is a very racist act by itself!”

Students also mentioned in a Facebook thread on a student page that Klein has engaged in emails with female students that have been called, “inappropriate” and “sexual harassment.” A screenshot was taken of the alleged exchange. Some are suspicious that the leave is partly due to this as well. 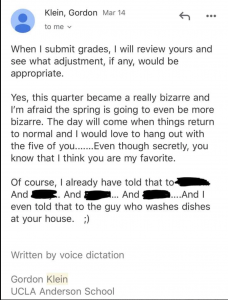 Professor Klein has been employed with the UCLA Anderson School of Management for 39 years. For more information on his biography, view his faculty page here.